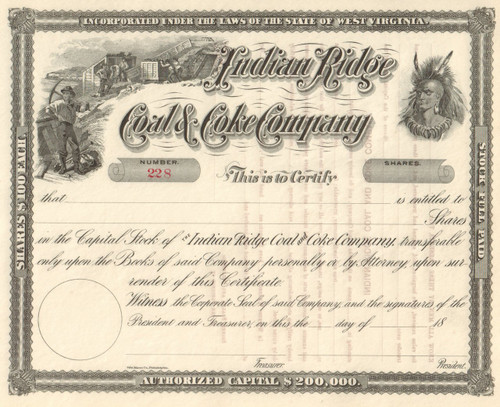 Very nice double vignette with an American Indian to the right and a sweeping miner/mining vignette in the left corner.  Unissued and not cancelled. Circa 1893 from corporate records..

Incorporated in 1893 by Worth Kilpatrick. The company owned coal mining operations near Bluefield, West Virginia to include the Pocahontas coal fields, west of Great Flat Top Mountain.

Worth Kilpatrick was born in Connellsville, Pa., March 31, 1847. His father and mother were John P. Kilpatrick and Mary Marietta Kilpatrick. He spent 25 years as a successful contractor, and also as a manufacturer of fire brick. Mr. Kilpatrick helped organize the Second National Bank of Connellsville, acting as Vice President till 1904, since which time he has been its President. In 1893 he organized the Indian Ridge Coal and Coke Company, operating in the Pocahontas coal fields, and as President of that company and later President of the Zenith Coal & Coke Company, the Kilarm Coal and Coke Company, the Webster Lumber Company, and the E. & A. R. R.