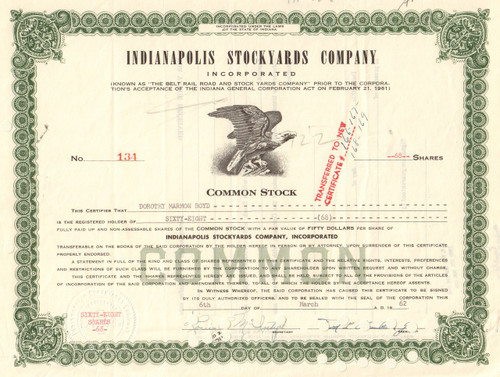 By 1880, Indianapolis was the third largest pork packing city behind Chicago and Cincinnati. In 1877, the Union Railroad Transfer and Stock Yards Company opens. Its name is changed to the Indianapolis Belt Railroad and Stockyard Company in 1881. The business was renamed Indianapolis Stockyards Company Inc. in 1961 as the railroad business was spun off.  The company focused on mostly cattle and hogs.

The Indianapolis Belt Railway Company was incorporated on 28 June 1873 for the purpose of constructing, operating, and maintaining a railroad around the city from North Indianapolis to Brightwood. A movement for the erection of a stockyard near the west bank of the White River took shape a short time later and was contingent upon the railroad's construction. The panic of 1873 and legal right-of-way battles delayed the construction of the railroad and the stockyards a short time later, but the company formed its articles of association in 1876 under the name of the Union Railroad Transfer and Stock Yards Company.

In 1881 the firm's name was changed to the Indianapolis Belt Railroad and Stock Yard Company, and the following year, the Belt Railroad facilities were leased to the Indianapolis Union Railway Company for 999 years. Founded in the early 1850s, the locally operated Union Railway Company owned and maintained the Union Railway Passenger Station (Union Depot) and approximately one mile of track around the facility. The Pennsylvania Railroad and the New York Central systems (now Conrail) later acquired the company, but the railway continued operating as a distinct organization while leasing the track, equipment (engines and cars), and facilities from the Belt Railroad.

A fire in 1904 nearly destroyed the entire stockyard complex with the exception of the Livestock Exchange Building but new and enlarged structures were soon erected. A truck department was added to the stockyard operation in 1919 and a hog division followed in 1926. Over the years, the stockyards expanded to encompass 147 acres, 60 of which were used for the livestock industry. At its peak in the 1930s and 1940s, the stockyards handled three million animals a year. In 1961, the company's name was altered to the Indianapolis Stockyards Company, Inc.

The decline of the Indianapolis meat packing industry resulted in a substantial decrease in shipments in the late 1950s and 1960s, and in 1967 Indianapolis Stockyards, Inc. was sold to Eli Lilly and Company, and they, in turn, leased the area to the United Stockyards Company of Chicago.