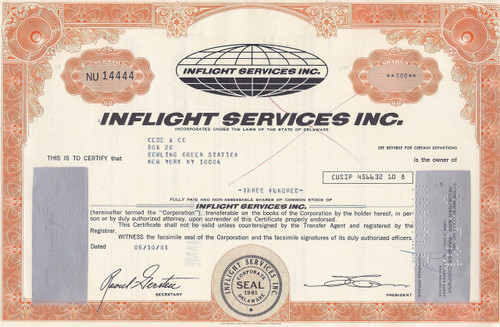 Interesting inflight movie company that pioneered the service for the airlines. Large company logo printed at the top for the vignette. Cool history and fun facts below.

1961: Trans World Airlines becomes the first airline to offer regular in-flight movies, launching a form of entertainment that has become a mainstay of air travel. The first film shown, on a flight from New York to Los Angeles 50 years ago today, was By Love Possessed starring Lana Turner. The screening was in the first-class cabin only and was the result of a eureka! moment for the technology’s mastermind, David Flexer.

Flexer, a film buff who owned a small chain of movie houses, was on a transcontinental flight in 1956 when he realized — and recounted to Life magazine — “Air travel is the most advanced form of transportation and the most boring.” Prior to Flexer’s realization there had a been a few rudimentary in-flight movie screenings. In 1921, for example, attendees at a Chicago fair were treated to a flight over the city in a small plane while watching a promotional film for the town. But no airline regularly offered the service.

Flexer decided to see if he could bring his business to the sky. First, he had to overcome some technical problems. He had to find a way to put full films onto single reels that wouldn’t have to be switched. He also needed to build a projector that could withstand the rigors of turbulence and be light enough to mount on a plane. But after three years of development and $1 million of his own money, Flexer’s team developed a horizontal design that projected large 16mm reels, weighed less than 100 pounds and was sky-ready. Flexer’s new company, Inflight Motion Pictures, then went looking for an in-flight partner.

The airlines weren’t initially interested in Flexer’s wares. But then TWA, which at the time was looking to increase its profile, agreed to give Inflight a shot. Flexer and his team took a Boeing 707, fitted it with their equipment and spent the early part of 1961 flying around and fixing bugs. In July of that year TWA began offering films to first class passengers. The response was extraordinary, and soon flyers were paying huge fees to get into first class to catch the show. Before long, in-flight movies were everywhere.

David Flexer studied the systems and decided that the basic works of the Kodak Pageant projector system were the best available. He formed a company called Inflight Motion Pictures, Inc. and engineered an aircraft projection system that adapted that Kodak projection mechanism and fit it into a shallow ceiling area of an aircraft interior. To avoid the dilemma of changing 3 or 4 16mm film reels during a movie presentation, Flexer spliced all the film together and put it on giant 26" diameter reels. Films were normally run in a vertical reel fashion, but he opted for a ceiling mounted horizontal feed and take-up reel system. The technique was ingenious, and it worked relatively well.

Today, trivia and movie buffs alike confirm that in 1961 TWA was the first real exhibitor of inflight movies. Despite film breaks and mechanical problems, the Inflight Motion Pictures systems were working.  The company later changed its name to Inflight Services, Inc. to reflect the broadening of its service offerings to the aviation industry.

In-your-seat entertainment, of course, went on to become a staple of air travel. And today it is more often than not coupled with in-flight satellite radio as well as video on demand and even wireless internet.  But the next time you send one of those “I’m on a plane!” tweets, just remember the big dream of David Flexer.