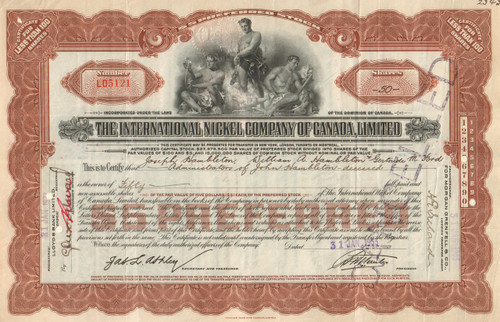 The Company was founded following the discovery of copper deposits in Sudbury, Ontario. Initially, ore was shipped for smelting to a plant in Constable Hook, New Jersey, owned by the Orford Copper Company. Processing soon revealed that the ore was also rich in nickel and exploration tests revealed an enormous potential. In 1902 the International Nickel Company, Ltd. (INCO) was created in New York, NY as a joint venture between Canadian Copper, Orford Copper, and American Nickel Works. In 1916, the International Nickel Company of Canada, Ltd. was incorporated as the operating company in Copper Cliff in Sudbury, and in 1918 the company built a new refinery in Port Colborne. The International Nickel Company of Canada, Ltd., first began using the trade name Inco in 1919.

In 1929, the corporation expanded by absorbing the British-owned Mond Nickel Company. A head office was established in Toronto. During World War II, Inco's Frood Mine produced 40% of the nickel used in artillery by the Allies. Inco also maintained a machining plant located in Sterling Forest, New York. The Sterling Forest Site was sold and is now owned and occupied by International Business Machines. In 1972 the Inco Superstack was built in Sudbury. In 1976, the company’s name was officially changed to Inco Limited.

In order to generate cash Inco sold its manufacturing sites of nickel alloys to Special Metals Corporation in 1998. Special Metals Corporation however filed Chapter 11 in March 2002. On October 11, 2005, Inco announced a friendly takeover bid to buy out the operations of longtime rival Falconbridge for $12 billion. If approved, the deal would have made Inco the world's largest producer of nickel. Xstrata subsequently submitted a hostile takeover bid for Falconbridge, resulting in a bidding war between Inco and Xstrata. The Xstrata bid was successful, but not before Falconbridge employed a poison pill to delay the acquisition.

On August 14, 2006 Brazilian mining company CVRD extended an all-cash offer to buy Inco for $17 billion. That offer received approval from the Canadian government's investment review agency on October 19, and was accepted by Inco shareholders on October 23. Part of the takeover deal was that CVRD would operate Inco as a separate nickel mining division; all of CVRD's nickel operations, including mines at Onca Puma and Vermelho in Brazil, were transferred to Inco's management. Inco was delisted from the NYSE on November 16, 2006 and the TSX on January 5, 2007. According to its current web site, Inco is now a wholly owned subsidiary of Vale (formerly CVRD). Vale has since changed the name of Vale-Inco to simply Vale, stating the change is "a milestone that aligns it more fully with other Vale operations worldwide and reflects its position as part of the world’s second largest mining company"