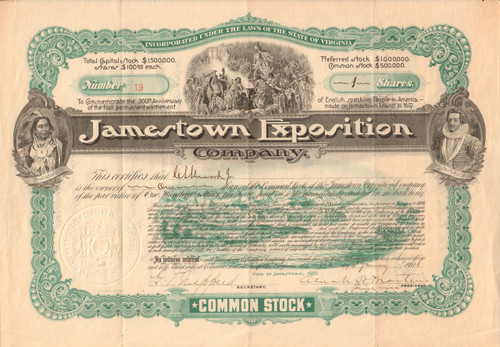 Extraordinarily rare stock certificate to fund the 1907 expo to celebrate the 300th anniversary of the founding of Jamestown in Virginia, the first successful English settlement of the New World. Top vignette is magnificent and shows Pocahontas saving Captain John Smith from execution by Chief Powhatan.  Left vignette shows a bust of Chief Powhatan (Wahunsenacawh) of the Powhatan peoples. Right vignette shows a bust of King James the First of England for which the colony was named.  Underprint shows an interpretive scene of the Jamestown fort and buildings. Dated January 12, 1906. this issue is in green as common stock.

The Jamestown Ter-Centennial Exposition ran from April 26 – November 30, 1907. This impressive model city was built at Norfolk’s Pine Beach with the idea to capitalize on the craze in American popular culture at the time for pageantry and have something like a World’s Fair for Hampton Roads. Today Pine Beach is part of Norfolk Naval Base and some of the grounds have since given way to a golf course and other functions for the base. However some original buildings still remain having been re-purposed into the officers’ club and admiral’s quarters.

All told about 1.2 million visitors attended the Exposition. Yet by many accounts the Jamestown Ter-Centennial was a financial failure. It even reopened in 1908 once its unfinished exhibits were completed. In an effort to raise funds stock was issued in the Jamestown Exposition Company but nevertheless the exhibit closed with about $900,000 in debt. Although it might have been a failure in its day, the Exposition was really just ahead of its time. In 1907 Jamestown Island and Williamsburg had not yet been refurbished into the destinations they are today. The Exposition played an important role in establishing historical tourism as one of the main commercial draws of the Hampton Roads area.

The Jamestown Exhibition drew more than one million tourists, including such celebrities as Booker T. Washington and Mark Twain. One highlight was a visit from President Theodore Roosevelt who steamed out of the Potomac and down the Chesapeake on his yacht, the Mayflower. The Exposition served double duty for President Roosevelt because it was to be the launch point of the “Great White Fleet.”

In 1900, the Association for the Preservation of Virginia Antiquities began planning for a celebration of the tercentenary (300 year anniversary) of the founding of Jamestown and the Virginia Colony by settlers from England. Most people expected the celebration to be hosted by Richmond, the capital of Virginia, but the City of Norfolk began lobbying for that honor in 1901, citing its proximity to Cape Henry, where the Jamestown colonists first made landfall. During the planning phase, virtually no one thought that the original site of Jamestown would be suitable, as it was isolated and long-abandoned. There were no local facilities to handle large crowds and it was believed that the fort housing the settlement had long ago been swallowed by the James River. No rail lines ran nearby.

Norfolk subsequently won out, and the Jamestown Exposition Company was incorporated in 1902. The Company decided to locate the international Exposition on a mile-long frontage at Sewell’s Point in an area of salt marsh and farmland. While hard to reach by land, it was much more favorably accessible by water, which ultimately proved a great asset.

The eastern portion of the new Tidewater Railway was rushed into service, and the local Norfolk Southern Railway added substantial passenger capacity to move the thousands of daily attendees anticipated. On the shore, new piers had to be constructed for moving supplies to Exposition buildings. Hotels must be raised to handle the millions of anticipated Exposition visitors. Bad weather slowed everything.

The Exposition Company had initially lobbied the federal government for $1,640,000, and later received a loan for an additional $1 million, to be repaid with 40% of the gate receipts. When crowds failed to appear as expected – the Exposition was attracting about 13,000 visitors daily, only 7,400 of whom paid entrance, almost half receiving complimentary or “comped” entrance – the Company was able to repay only $140,000 of the $1 million loan. The Fair began attracting negative attention in the press as early as January, 1907 before it opened, as a divisive split between members of the planning committee became public. The press who arrived for opening day found the grounds unfinished, the hotels overpriced, and the transportation between the Fair and nearby towns.

The first day of the Exposition had its share of difficulties. Only 20% of the electric lights could be turned on, and the Warpath recreation area (the midway) was far from ready. Construction of the government pier left much of the ground in the center of the Exposition a muddy soup. Of the 38 principal buildings planned, only 14 had been completed by opening day – the Fire Engine House and the waterfront boardwalk having been completed only in the preceding two days. Unlike the structures at prior U.S. Expositions, the buildings at Jamestown were permanent, costing more and taking longer to build. The Exposition Company failed to complete two planned buildings, the Historic Art and Education buildings, by the Exposition’s end. President Theodore Roosevelt opened the Exposition and presided over the Naval Review. After opening day, attendance dropped sharply, and never again achieved projections. But, in time, things improved somewhat and portions of the event became spectacular.

Although Exposition organizers wanted all 45 of the U.S. states to participate, only 21 chose to erect buildings. Special days were set aside during the Exposition to honor each state and territory individually, including the ones that chose not to actively participate.

Despite great expectations and hopes on the part of organizers, the Jamestown Exposition never enjoyed great popularity at the gate and the Exposition Company was left with a massive debt. The site on which the Exposition was held is now part of Norfolk Naval Station, and some of the original Exposition buildings are still in use today. The Exposition closed on December 1, 1907 as a financial failure, losing several million dollars. Attendance had been 3 million, a fraction of the numbers promised by the promoters. But, it had other benefits for the United States and for Norfolk and Hampton Roads. One of the most impressive displays was a Naval Review featuring all 16 U.S. battleships, along with warships from several other nations. The battleships later became the core of Roosevelt’s “Great White Fleet,” which visited ports around the world in order to promote the glory and might of the United States.