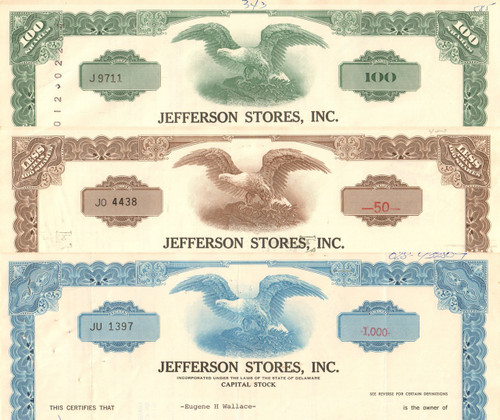 Nice, affordable retailer stock with a great eagle vignette printed in the color of the border.  This is for the set of 3 colors. Individual pieces are available in the GENERAL section. Issued and cancelled, Dated in the 1960's.

Incorporated in 1960, this Miami-based company operated a small chain of upscale discount stores.

Within 18 months, Mobil quintupled the size of the operation, now called Jefferson Ward, to over 40 units, with plans to convert one-third of Montgomery Ward's existing stores to the Jefferson Ward model. The burden of servicing the new stores fell to the tiny Jefferson staff who were overwhelmed by the increased store count, and who had no experience in dealing with some of the product categories they were now required to carry, not to mention their unfamiliarity with buying for northern markets.

Almost immediately, Jefferson had turned from a small moneymaker into a good-sized loss operation. The chain's 18-store Northern Division was sold to Bradlees, a division of Stop & Shop, in 1986. The remaining stores were closed.