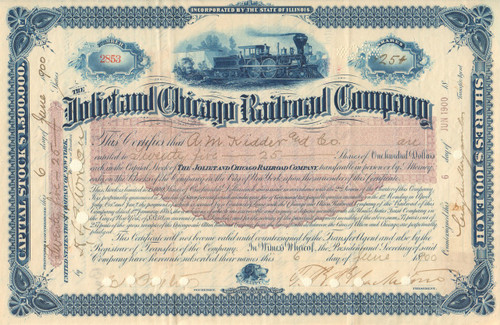 The Joliet and Chicago Railroad was chartered February 15, 1855 and opened in 1856, continuing north and northeast from Joliet to downtown Chicago. It was leased by the Chicago & Mississippi, providing a continuous railroad from Alton to Chicago. In 1857 the C&M was reorganized as the St. Louis, Alton and Chicago Railroad, and another reorganization on October 10, 1862, produced the Chicago and Alton Railroad. The C&A chartered the Alton and St. Louis Railroad to extend the line to East St. Louis, opened in 1864, giving it a line from Chicago to East St. Louis.

The Bridgeport segment of the Chicago & Alton Railroad was in actual fact the Joliet & Chicago Railroad, but it had been perpetually leased by the Chicago & Alton from the early 1860s onward. The line later became part of the Gulf, Mobile & Ohio Railroad, which itself was merged with the Illinois Central Railroad to form the Illinois Central Gulf Railroad.