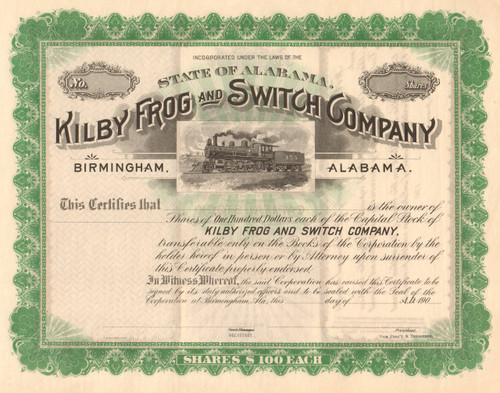 Nice rail collectible with great steam train vignette. nice green under print around the engraving. Dark lines on the face are from the backside printing (not stained). Unissued and not cancelled. Circa 1902 from company records.  Dated 190_.

Railroad frog
A track structure used at the intersection of two running rails to provide support for wheels and passageways for their flanges, thus permitting wheels on either rail to cross over the rails.

The Kilby Car & Foundry Company began at Anniston, Alabama, sometime between 1902 and 1910. It was the successor to the Kilby Locomotive & Machine Works, founded in 1898 by Thomas E. Kilby, who would go on to become Governor of Alabama.  In 1889, Thomas Kilby had gone to work for the steel and railway supply firm of Clark & Company. He worked his way up to a full partnership with Harry Clark, and the firm became Clark & Kilby. It is likely the firm became Kilby Locomotive & Machine Works in 1898.

The company’s works, built in 1898, covered four acres. It had its own steam  plant, powering all the machinery, heating the buildings and providing the electricity for its electric lighting. The new company engaged in rebuilding locomotives, built logging, cane and tram cars, and manufactured frogs and switches.  As of 1902, T.E. Kilby was in the process of starting up the Alabama Frog & Switch Company. The machinery for the plant had been ordered and the contract for buildings had been let. M.K. Moore was President of the new business, and M.B. Wellborn was its Treasurer. Thomas E. Kilby was named as its Manager.  It appears that early on the name of this company became Kilby Frog & Switch.

Sometime before 1910, Kilby Locomotive & Machine became Kilby Car & Foundry. This very likely had something to do with the stock market crash of 1907 and the ensuing financial problems of the railroads. It may reflect a financial reorganization of the company. And/or it may reflect a cessation of the locomotive rebuilding efforts of the company and more concentration on car-building and general steel fabrication. The company put out a catalog in 1910 titled “Kilby Standard Logging Cars.”

But Kilby must have built more than logging cars, as in 1924 we find documentation of an order for 150 gondola cars from the Southern railway.  In 1934, we find Kilby mentioned in articles about small steel producers. In 1925, Kilby Frog & Switch was consolidated with the Weir Frog & Switch Company of Norwood (Cincinnati), Ohio, with the latter company becoming the controlling interest.

Kilby apparently quit building railway cars sometime prior to 1938, probably due to the Great Depression, and it was reorganized as the Kilby Steel Company. Five years later, Thomas Kilby died, and three years after that Kilby Steel was acquired by the J.I. Case Company.