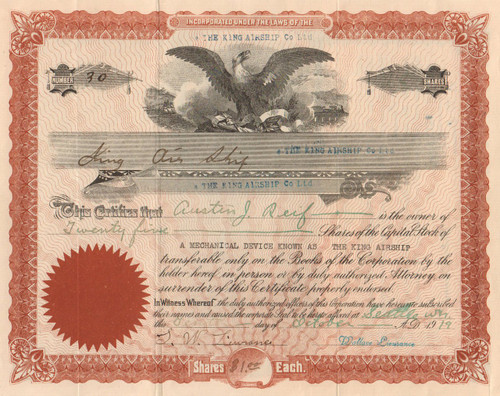 Only King piece we have seen in this handwritten format (later stamped company name).  Classic vignette of eagle with wings spread in front of railroad and sailing ship scenes. Issued and not cancelled. Dated 1919.

Incorporated in Seattle WA circa 1919, this company joined many others in the aviation race of the era.  There were many fantastic designs that never came to operation or production. According to the picture of the patent, it looks like this design was not a winner.

W. M. Lieurance filed a design for an airship body with the U.S. Patent Office.  William W. Lieurance, Seattle, Wash. Filed Mar. 18, 1920. Serial No. 366,988. Term of patent 14 years. The ornamental design for an airship body (see picture).  It is unclear how the airship would actually fly so it is assumed they "never got off the ground" with this proposal.  In 1922, Lieurance sued the King Airship Company for amendment articles to the original incorporation. Since company officers (on certificate) are named Lieurance, it is likely a family business gone poorly.