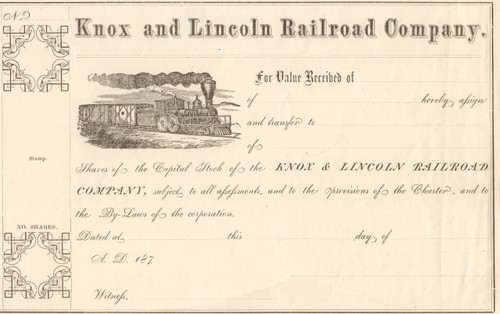 The Rockland Branch is a railroad from Brunswick, Maine to Rockland, Maine. A charter was granted in 1849 to build a railway from the Portland and Kennebec Railroad on the west side of the Kennebec River to Rockland. Construction through the rocky headlands of the Atlantic coast proved more expensive than anticipated. The Knox and Lincoln Railroad commenced service to Rockland in 1871 using a ferry to cross the Kennebec River between Bath and Woolwich.

The Knox and Lincoln was leased by Maine Central Railroad in 1891, and became Maine Central's Rockland Branch in 1901. Maine Central purchased the Samoset destination hotel in nearby Glen Cove (a part of neighboring Rockport) in 1912, and offered direct passenger service for summer visitors from the large eastern cities. Carlton bridge was completed in 1927 to carry the railroad and U.S. Route 1 over the Kennebec River. Maine Central sold the Samoset hotel in 1941,and the last Maine Central passenger train to Rockland was on 4 April 1959. The State of Maine purchased the branch in 1987 to prevent abandonment. The line has subsequently been operated by the Maine Coast Railroad, the Maine Eastern Railroad, and, beginning in 2016, the Central Maine and Quebec Railway.