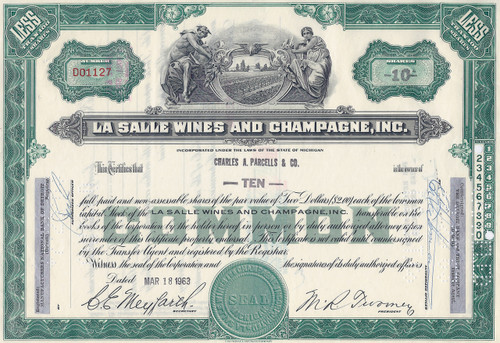 Michigan’s wine history is laden with tales of discovery, perseverance and passion for crafting wine from fruits that thrive in our soils.  Winemaking is first noted in 1679 when valiant French explorers make wine from grapes growing wildly along the beautiful Riviére du Détroit. Two decades later, settlers plant a vineyard at Fort Ponchartrain du Détroit.

By the mid-1800s, a viable wine industry is established after enterprising pioneers plant vineyards in Monroe County. Wine production in this region thrives and Michigan is a leader in the industry until the onset of Prohibition. After the Repeal, several new wineries open, many of which relocate to southwest Michigan where vineyards established prior to Prohibition had survived by supplying grapes to Welch’s Grape Juice Company.

Between 1930 and 1970, Michigan’s winemakers garner regional and national attention for their wines before facing many challenges that ultimately shut down operations for all except two: St. Julian Wine Company and Warner Vineyards. The families that run these wineries have persevered and led the way for today’s modern-day wineries and, in the process, have reinvented their own wineries to serve today’s savvy wine consumers.

Wine and eno-tourism were estimated in 2007 to be a $300 million industry. Most of the quality bottled wine of Michigan is produced in the four American Viticultural Areas (AVAs) of Fennville AVA, Lake Michigan Shore AVA, Leelanau Peninsula AVA, and the Old Mission Peninsula AVA. There are also a few wineries in every region of the state including some in the Upper Peninsula that have opened over the past several years. In addition to grape wine, Michigan is a leader in the production of fruit wines such as cherry wine.

Michigan's wine industry dates from after the repeal of Prohibition. With large plantings of Concord in the southwest, mostly for the Welch Grape Juice Company, the state was well positioned to enter wine production. Four large wineries (out of eleven wineries established by 1946) came to produce almost all Michigan wine: La Salle Wine and Champagne Company which was established in Windsor, Ontario, and moved to Farmington, Michigan; the Bronte Champagne and Wines Company of Hartford; Michigan Wineries (now Tabor Hill Winery) of Buchanan; and St. Julian Winery, which was also established in Windsor, Ontario, on the Canadian shore across from Detroit during Prohibition and moved to Paw Paw, Michigan, after repeal.