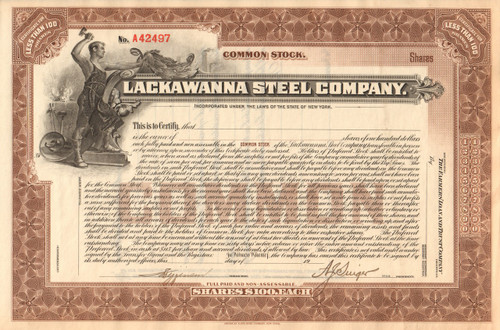 Great steel industry piece. Unusual side vignette of a steel worker with forge and tools.  Unissued and not cancelled. Signed by treasurer and vice president. Dated 19__, circa 1902 from issued examples.

The Lackawanna Steel Company was an American steel manufacturing company that existed as an independent company from 1840 to 1922, and as a subsidiary of the Bethlehem Steel company from 1922 to 1983. Founded by the Scranton family, it was once the second-largest steel company in the world. Scranton, Pennsylvania developed around the company's original location. When the company moved to a suburb of Buffalo, New York, in 1902, it stimulated the founding of the city of Lackawanna.

At the beginning of the 1800s, the Lackawanna Valley in Pennsylvania was rich in anthracite coal and iron deposits. Brothers George W. Scranton and Seldon T. Scranton moved to the valley in 1840 and settled in the five-house town of Slocum's Hollow (now Scranton PA) to establish an iron forge. The Scrantons and Henry formed a partnership in 1840 to develop a hot blast furnace that used anthracite coal in the "charge". Two other Pennsylvanians, Sanford Grant and Philipp Mattes, also invested in the new company, named Scranton, Grant, and Co. Henry bought 503 acres  near Slocum's Hollow, and began building the furnace.

After many failures and two years of low-level and low-quality production of pig iron, the firm began producing significant amounts of pig iron in 1843. Realizing that the "cold-short" ore they used was ideal for manufacturing rail tracks, the Scrantons sought new investors whose money would permit it to build a rail track rolling mill. Benjamin Loder, president of the New York and Erie Railroad; industrialist William E. Dodge; and eight others invested $90,000 in the firm. Scrantons and Grant reorganized again on November 7, 1846, and began calling the company Scrantons and Platt. The company quickly began turning out rails for the Erie Railroad, becoming the first company in the United States to mass-produce T rails.  Shipments of rail track were hauled overland through the snow to the New York and Erie Railroad, arriving just in time to save the line from bankruptcy

In 1853, the firm reorganized, doubling its capital investment and adopting the name Lackawanna Iron and Coal Company.  The company also expanded into the railroad business in 1853. Needing a way of moving products without high railway fees,  the company purchased a controlling interest in the Delaware and Cobb's Gap RR and the Lackawanna and Western RR. They reorganized the combined subsidiary into the Delaware, Lackawanna and Western Railroad, beginning vertical integration of their industry.

At the turn of the century, the Lackawanna Iron and Steel Company began to consider moving out of the Scranton area. The company's economic condition was deteriorating.  Labor costs were rising. In 1897, the United Mine Workers had organized most workers at the coal and iron mines, who successfully struck in 1900 for a 10 percent wage hike. A second factor was the increasing cost of shipping iron ore to Scranton and a lack of rail lines from Scranton to the company's newly emerging markets.

The Lackawanna Iron and Steel Company decided to move its facilities to the town of West Seneca, New York, in 1899, drawn by the area's easy access to Great Lakes shipping and the numerous rail lines in the area. Scranton decided to move his operation to the Buffalo suburb, located on Lake Erie. The group explored several nearby sites on March 24, and that same day chose an undeveloped shoreline area on Lake Erie in what was then the western part of the Town of West Seneca.   Construction of the massive new steel mill began on July 14, 1900, and nine months later equipment was arriving from Scranton. The company dredged a ship canal and built miles of track to link the plant with the railroads which would bring iron ore and coke to the plant.

On February 14, 1902, the company was reorganized into the Lackawanna Steel Company. It was the largest independent steel company in the world at the time. Stock worth $60 million was issued, with $20 million of the newly raised capital paying off the construction of the new mill. The mill received its first shipment of iron ore on December 23, 1902. The company's property in Scranton was sold to the Lackawanna and Wyoming Valley Railroad, which scrapped all the remaining equipment and tore down all the buildings except for the oldest stone blast furnaces

In 1922, Lackawanna Steel Co. was acquired by the Bethlehem Steel Company, ending the company's 62-year independence. Merger rumors had plagued the company for several years by then. In late April 1922, the seven "Little Steel" firms began to openly discuss the merger of two or more of the companies as a means of challenging U.S. Steel. The chief executives and creditors of these firms visited one another's plants in order to appraise them and assess the financial viability of each company.

On May 11, 1922, Lackawanna Steel announced it had agreed to be purchased by Bethlehem Steel in a merger which would create a billion-dollar company. The combined company controlled about 10 percent of the steel output of the United States, while U.S. Steel controlled about 45 percent.  Lackawanna continued to be a center for the manufacture of steel throughout most of the 20th century. In the 1940s, the Lackawanna steel mill employed over 20,000 people, and was the world’s largest steel factory.

In the 1970s and 1980s, Bethlehem Steel allowed the Lackawanna Steel plant to become obsolete. Foreign competition made it financially impossible to continue to manufacture most of the products produced at Lackawanna. Bethlehem Steel also disliked the high tax rates of the state of New York, and did not want to spend the millions of dollars in air and water pollution abatement which were required by state and federal authorities. In 1982, Bethlehem Steel announced the closing of nearly all production at the Lackawanna Steel plant in New York. The Lackawanna Steel Co. plant closed on October 15, 1982. On the day the plant closed, more than 6,000 workers lost their jobs. The city of Lackawanna's 22,700 people faced extremely large tax increases just to maintain basic services, as the amount of taxes paid by Bethlehem Steel fell from 66 percent of the city's revenue to just 8 percent.