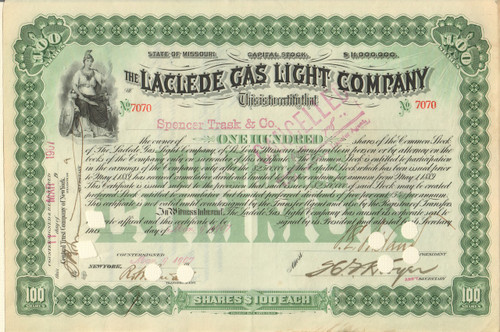 Nice utility stock. Wonderful vignette of a female warrior seated on a throne with shield. Issued and cancelled. Dated 1901 to 1907.

Laclede Gas Company is the largest natural gas distribution utility in Missouri residential, commercial and industrial customers in the city of St. Louis and ten counties in eastern Missouri. As an adjunct to its gas distribution business, the Company operates an underground natural gas storage field, a propane storage cavern, and propane vaporization facilities. Lacede Gas is a regulated public utility and a wholly owned subsidiary of The Laclede Group. Its corporate headquarters is located at the Laclede Gas Building in downtown St. Louis.

Gas lighting displaced candles, whale oil lamps and kerosene lamps, and came before the invention of electric lighting, and gas cooking and heating. In 1896, Laclede Gas Light was one of 12 companies included on the first Dow Jones list. With the advent of electric lighting, Laclede adapted its business from a lighting to a heating provider and a viable natural gas distribution company.