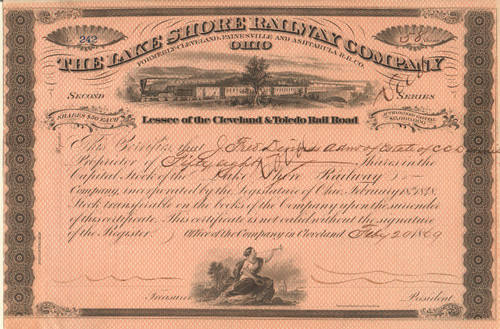 Very nice older railroad piece.  Rare issuance from this company and very difficult to find. Wonderful top vignette a steam train with a long line of passenger cars.  The bottom vignette has a classical female figure seated on a rock with a trumpet and ships in the background. Additional printing includes "Formerly Cleveland, Painesville, and Ashtabula RR Co" and "Lessee of the Cleveland & Toledo Rail Road".  Amazing color lines in underprinting. Unissued and not cancelled (pen marked as "void"). Dated 1869.

The main route passed through Dunkirk, NY, Erie, PA, Ashtabula, OH, Cleveland, OH, Toledo, OH, Waterloo, IN and South Bend, IN. An alternate route (the Sandusky Division) in Ohio ran north of the main line between Elyria and Millbury (not all track was laid until 1872). From Toledo to Elkhart, the Old Road ran to the north, through southern Michigan, and the through route was called the Air Line Division or Northern Indiana Air Line. Along with various branches that had been acquired the Monroe Branch ran east from Adrian, MI to Monroe, where it intersected the leased Detroit, Monroe and Toledo Railroad.

In December 22, 1914, New York Central and Hudson River Railroad merged with the Lake Shore and Michigan Southern Railway to form the New York Central Railroad (NYC) which is the main line running south between Toledo and Elyria, eventually passing by north through the Sandusky Division. In 1968 the New York Central merged into Penn Central, and in 1976 it became part of Conrail. In 1976, the Southern Division from Elyria to Millbury was abandoned, with parts of the former right of way now in use as a recreational trail, the North Coast Inland Trail. Under Conrail, the Lake Shore main line was part of the New York City-Chicago Chicago Line.