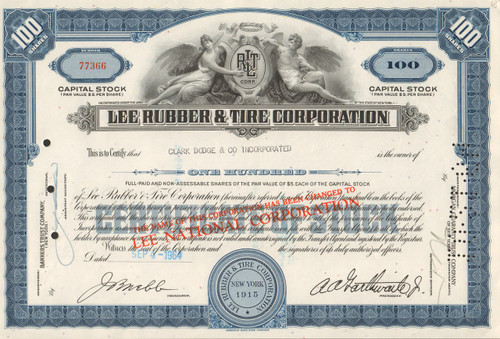 Lee Rubber and Tire Company, also known as Lee Park, is a historic rubber and tire factory complex located in the Spring Mill section of Whitemarsh, Montgomery County, Pennsylvania. The main building was built in 1909, and is a vast, four-story, administration building. It is a symmetrical structure with terminating and central towers and features engaged Tuscan order columns framing the main entrance doors. The 12 remaining contributing buildings in the complex include one- and two-story, manufacturing buildings and a water tower (1909)

The building was built in 1910 by John Ellwood Lee, an 1879 graduate of Conshohocken High School. In 1883, Lee started a company that manufactured surgical supplies, including a metal splint for broken limbs that he had invented.

Fascinated by the automobile, Lee sold that business to Johnson & Johnson and built the tire factory, helped by advice, according to records, from Henry Ford. After labor troubles, the plant was bought by rival Goodyear Tire & Rubber Co. in 1965, and closed in 1980.

J. Ellwood Lee opened his first factory in Conshohocken, Pennsylvania in 1887, but his business at the time wasn't rubber--it was medical supplies. Business was good, and by the start of the 20th century Lee's company had 600 employees, rendering it the largest individual employer in Conshohocken at the time. But Lee foresaw the popularity of automobiles, and recognized a potential in the rubber tire market. In 1905 he merged his medical supply operations with Johnson & Johnson. While his plant in Conshohocken continued to produce medical supplies until 1909, Lee began experimenting with rubber production. In 1912, the Lee Rubber and Tire Company factory opened. J. Elwood Lee died soon after in 1914, but his company flourished and "Lee of Conshohocken" tires became a household name.

After enjoying about half a century of success, Lee of Conshohocken began to decline. A New York firm took over the majority of Lee stocks in the early 1960s, and changed the company name to Lee National Corporation. Soon after, the corporation was sold to Goodyear Tire and Rubber Company in 1965. They restored the original name of Lee Rubber and Tire Company, but the company's factory equipment was outdated and its days were numbered. Lee of Conshohocken went out of business in 1980.