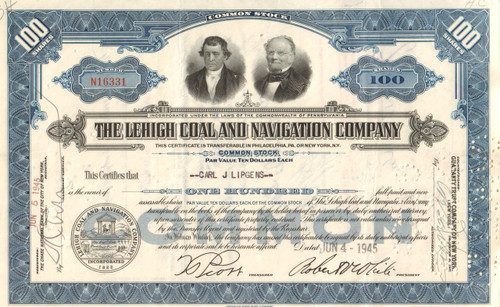 Formed in 1822 by combining the Lehigh Coal Mining Company and the Lehigh Navigation Company, it represented the first merger of interlocking companies in the United States. Five years later, the company built the Mauch Chunk Switchback Railway: the first coal railroad and just the second railroad company in the country after the B&O. The company was founded by industrialists Josiah White (1780-1850) and Erskine Hazard (1790-1865), who sought to improve delivery of coal to markets.

The Lehigh Coal & Navigation Company was an outgrowth of the earlier Lehigh Coal Mine Company, which was founded the year after coal was discovered by a hunter, Philip Ginter, discovered coal on Sharpe Mountain—one peak of a succession of peaks along the biblically named Pisgah Ridge as Pisgah Mountain was then known near the border between Schuylkill and Coal Counties.

Pisgah Mountain was situated as the center ridge of three nearly parallel ridges closed on the east extension with Nesquehoning Mountain where the Lehigh River punches through their joining at the bend occupied by Jim Thorpe, Pennsylvania (this would become historic Mauch Chunk, and the Headquarters of the LC&N company), while the right bank bend to Lehighton is part of the join between the Mauch Chunk Ridge and Pisgah Mountain. This concern had unsuccessfully attempted to transport and market anthracite from the large deposits on Pisgah Mountain near what is now Summit Hill, Pennsylvania, to Philadelphia via the Lehigh and Delaware Rivers.

Sporadically active between the years of 1792 and 1814, the Lehigh Coal Mine Company was able to sell some of its coal to Josiah White and Erskine Hazard, who operated a wire mill at the Falls of the Schuylkill near Philadelphia. These two innovative entrepreneurs leased the Lehigh Coal Mine company's properties in 1817. Having earlier displayed great technological skills by creating the world's first iron wire suspension bridge, which spanned the Schuylkill at their wire works, White and Hazard planned to tame the turbulent Lehigh River by creating an effective navigation system.

By 1818, they had organized the separate Lehigh Coal Company and the Lehigh Navigation Company to accomplish their plans. The navigation company began to install locks, dams, and weirs, improving the navigability of the rapids-ridden Lehigh River. Within the next two years, White and Hazard constructed a descending navigation system that used their unique "bear trap" or hydrostatic locks, which allowed the passage of coal boats by means of artificial floods. By 1821, the Lehigh Coal & Lehigh Navigation companies were merged. Formally incorporated in 1822, the Lehigh Coal & Navigation Company was transporting large amounts of coal to Philadelphia by 1824.

In order to bring more coal from the mines to their navigation system, the Company constructed America's second railroad in 1827-28. During these same years, it also began the conversion of its descending navigation system into a two-way system. With rights of eminent domain, the Lehigh Navigation was constructed and completed in 1829; this improved Lehigh Navigation system had the largest carrying capacity of any canal in the United States. Stretching from Mauch Chunk to Easton, this waterway was soon connected to both New York and Philadelphia by the completion of the Morris and Delaware Canals in 1832 and 1833 respectively. To take advantage of this new and improved access to America's largest metropolitan markets, the Lehigh Coal & Navigation Company made a concerted effort to develop the water power sites along its waterways into early industrial parks. The Abbott Street area, near Lock 47, which is now part of Easton's Hugh Moore Park, employed over 1,000 men in almost a dozen manufacturing establishments by 1840.

By the beginning of the 20th century, coal had lost its hold on the energy market. The Lehigh Navigation unit was forced to close business activity in 1932. Greenwood Stripping Co. bought the coal property in 1966 before selling it to Bethlehem Mines Corp. in 1974. Finally, in 1986 shareholders dissolved the company, after having sold its last business, Cella's Chocolate Covered Cherries, to Tootsie Roll.