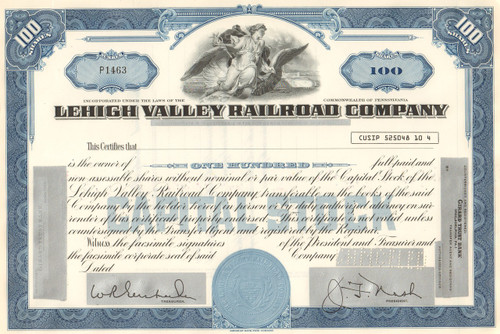 Nice vignette of a winged angel with a caduceus in front of transportation types (planes, trains, automobiles, buses, ships). Unissued and cancelled.  Crisp and clean. Circa 1950 from issued examples.

The Lehigh Valley Railroad was one of a number of railroads built in the northeastern United States primarily to haul anthracite coal.  It was authorized April 21, 1846 in the U.S. state of Pennsylvania and incorporated September 20, 1847 as the Delaware, Lehigh, Schuylkill and Susquehanna Railroad Company. On January 7, 1853, the name was changed to Lehigh Valley Railroad. It was sometimes known as the Route of the Black Diamond, named after the anthracite it transported.

The route was surveyed and grading started in 1850, but progress was slow and financing was insufficient. The railroad's growth occurred after Asa Packer invested in the railroad in 1852, and it was renamed the Lehigh Valley Railroad (LVRR). With Packer's backing and leadership his chief engineer Robert H. Sayre completed the road in 1855 from Mauch Chunk to the Delaware River at Easton, where coal could be shipped to Philadelphia on the Delaware Division Canal or transported across the river to Phillipsburg, New Jersey..

The 46-mile-long  LVRR connected at Mauch Chunk with the Beaver Meadow Railroad. The Beaver Meadow Railroad had been built in 1836, and it transported anthracite coal from Jeansville in Pennsylvania's Middle Coal Field to the Lehigh Canal at Mauch Chunk. For 25 years the Lehigh Canal had enjoyed a monopoly on downstream transportation and was charging independent producers high fees. It immediately became the trunk line down the Lehigh Valley, with numerous feeder railroads connecting and contributing to its traffic.

In 1864, the LV began acquiring feeder railroads and merging them with its system. The first acquisitions were the Beaver Meadow Railroad and Coal Company and the Penn Haven and White Haven Railroad. In 1866 the company acquired the Lehigh and Mahanoy Railroad, and a further round of acquisitions took place in 1868 with the addition of the Hazleton Railroad and the Lehigh Luzerne Railroad. The acquisitions in 1868 were notable because they marked the beginning of the LVRR's strategy of acquiring coal lands to ensure production and traffic for its own lines.

The 1880s continued to be a period of growth, and the LVRR made important acquisitions in New York, expanded its reach into the southern coal field of Pennsylvania which had hitherto been the monopoly of the Reading, and successfully battled the CNJ over terminal facilities in Jersey City. In 1883 the railroad acquired land in northeast Pennsylvania and formed a subsidiary called The Glen Summit Hotel and Land Company. They opened a hotel in Glen Summit, Pennsylvania called the Glen Summit Hotel to serve lunch to passengers traveling on the line.  Also in Pennsylvania, the Lehigh scored a coup by obtaining the charter formerly held by the Schuykill Haven and Lehigh River Railroad in 1886. That charter had been held by the Reading Railroad since 1860, when it had blocked construction in order to maintain its monopoly in the Southern Coal Field. That southern field held the largest reserves of anthracite in Pennsylvania and accounted for a large percentage of the total production.

In 1914 the Panama Canal was completed, and the LVRR gained an important new market with ores shipped from South America to the Bethlehem Steel company. In order to handle the additional new ocean traffic, the LVRR created a large new pier at Constable Hook, which opened in 1915, and a new terminal at Claremont which opened in 1923.

In the war years of 1914-1918, the Lehigh handled war materials and explosives at its Black Tom island facility, which had been obtained along with the National Docks Railroad in 1900. In 1916, a horrendous explosion occurred at the facility, destroying ships and buildings, and breaking windows in Manhattan. At first the incident was considered an accident; a long investigation eventually concluded that the explosion was an act of German sabotage, for which reparations were finally paid off in 1979.

After the U.S. entered World War I, the railroads were nationalized in order to prevent strikes and interruptions. The United States Railroad Administration controlled the railroad from 1918 to 1920, at which time control was transferred back to the private companies. Although the heavy wartime traffic had left the railroad's plant and equipment in need of repair, the damage was partly offset by new equipment that had been purchased by the government.

Throughout the 1920s the railroad remained in the hands of the Morgan / Drexel banking firm, but in 1928 an attempt was made to wrest control from them. In 1927, Leonor Fresnel Loree, president of the Delaware and Hudson Railroad, had a vision for a new fifth trunk line between the East and West, consisting of the Wabash Railroad, the Buffalo, Rochester and Pittsburgh Railway, and the LVRR. Through bonds issued by the D&H, he obtained 30% of the LVRR stock, and won the support of nearly half the stockholders. Following the defeat of its plan, the D&H sold its stock to the Pennsylvania Railroad. In the following years, the Pennsylvania quietly obtained more stock, both directly and through railroads it controlled, primarily the Wabash. By 1931, the PRR controlled 51% of the LVRR stock.

Following the Great Depression, the railroad had a few periods of prosperity, but was clearly in a slow decline. Passengers preferred the convenience of automobiles to trains, and airlines provided faster long-distance travel than trains. The Depression had been difficult for all the railroads, and Congress recognized that bankruptcy laws needed revision. The Chandler Acts of 1938-9 provided a new form of relief for railroads, allowing them to restructure their debt while continuing to operate.

Two final blows fell in the 1950s: the passage of the Federal-Aid Highway Act in 1956, better known as the Interstate Highway Act, and the opening of the Saint Lawrence Seaway in 1959. The interstate highways helped the trucking industry offer door-to-door service, and the St. Lawrence Seaway allowed grain shipments to bypass the railways and go directly to overseas markets. The Pennsylvania Railroad in 1962 requested ICC authorization to acquire complete control of the LVRR through a swap of PRR stock for LVRR and elimination of the voting trust that had been in place since 1941. It managed to acquire more than 85% of all outstanding shares, and from that time the LVRR was little more than a division of the PRR. The Pennsylvania merged with the New York Central in 1968, but the Penn Central failed in 1970, causing a cascade of failures throughout the East.

The Lehigh Valley remained in operation during the 1970 bankruptcy, as was the common practice of the time. In 1972, the Lehigh Valley assumed the remaining Pennsylvania trackage of the Central Railroad of New Jersey, a competing anthracite railroad which had entered bankruptcy as well.

On April 1, 1976, major portions of the assets of the bankrupt Lehigh Valley Railroad were acquired by Conrail. Additionally, a segment from Geneva to Victor, later cut back to Shortsville to Victor, plus a small segment west from Van Etten Jct., remained with the Lehigh Valley Estate under subsidized Conrail operation. The Shortsville to Victor segment became the Ontario Central Railroad in 1979. Most of the rail equipment went to Conrail as well, but 24 locomotives went to the Delaware & Hudson instead. The remainder of the assets were disposed of by the estate until it was folded into the non-railroad Penn Central Corporation in the early 1980s.