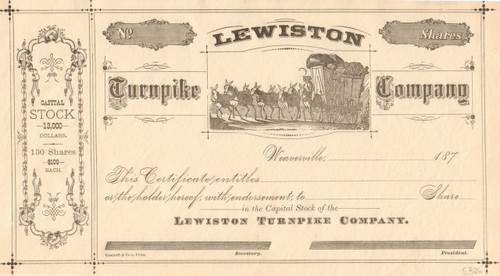 Simple art engraved vignette of a large wagon being pulled by a mule team. Unissued and not cancelled. Dated 187_.

The company operated a turnpike (road) between Lewiston and Weaverville in California.

Lewistown (as Lewiston was originally called), was started about 1850 by a Mr. Lewis with his Trading Post, and the town grew around his place of business and was named for him. Mr. Lewis hired men to build a bridge across Trinity river in 1852 that was used by pack trains because there were no roads that early. This bridge was washed away by floods on March 3, 1855. A new bridge was completed in October the same year.

Several bridges were lost at Lewiston. They were all toll-bridges until Mr. Phillips sold the next to the last bridge to Trinity County. This was a covered bridge and was operated by the county as a free bridge for a number of years until the floods of December, 1899 washed it away. One branch of the trail from Shasta came through Lewiston and crossed the lower end of Rush Creek, then continued over Browns Mountain to Weaverville. Another branch of the trail went farther south and came down Grass Valley Creek past Lowden Ranch and after fording Trinity River, went over Browns Mountain and on to Weaverville.

William Lowden put a bridge across Trinity River at Lowden Ranch in 1854. This was used by pack trains until Mr. Lowden's road from Weaverville to Tower House was completed in March of 1858. The Lowden Road from Lewiston via Rush Creek to Weaverville was completed in the fall of 1857.  In March, 1867, all the road traffic was going over this new road because floods had completely destroyed parts of the road going down Grass Valley Creek.

In 1874, there was a post office established at Lowden's Ranch and the stage contractor changed the stage to the road over Buckhorn, Grass Valley Road. This made a side run of the stage from Lowden's to Lewiston. This did not please the Lewiston people and their repeated protest finally caused the return of stages to the Turnpike Road.