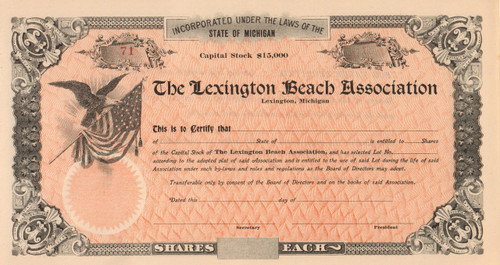 Great Michigan beach community certificate with a very nice vignette of eagle and American flag.  Unissued and not cancelled. Measures 5.5" by 10". Circa 1909 from company records..

Incorporated in 1909, Albert Sleeper founded and ran this beach neighborhood association in Lexington, Michigan.   The small town is located North of Detroit on the shores fofLake Huron.

Albert E. Sleeper, who was born in Bradford, Vermont, December 31, 1862, came to Lexington in the fall of 1884. After several years spent in the employ of S. C. Tewksbury & Co., and of which firm he later became a partner, he launched into the banking business and became director in the banks at Yale, Bad Axe, Marlette, Ubly, Applegate, and Lexington. After his marriage to Miss Mary C. Moore, July 30, 1901, he moved to Bad Axe. He was senator of the twentieth district from 1901-04 and elected state treasurer in 1910. He was elected governor of Michigan in 1916 and 1918. Mr. Sleeper died at Bad Axe, May 13, 1934, and was brought to Lexington for burial. His funeral was perhaps the largest of any ever held here, and was attended by Governor Comstock, ex-Governors Brucker and Groesbeck, the state militia, the several orders of the Masonic fraternity and school children who marched in a body. Thus the young man who came to Lexington penniless found his last resting place here amid the homage due one who had been accorded one of the highest honors in the state.