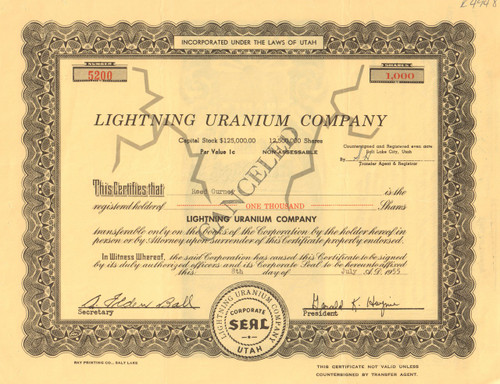 Cool mining piece. Great under print of lightning bolts across the face of the certificate. Issued and cancelled. Dated 1955-1970.

Incorporated 1955 in Utah, the company engaged in uranium mining in the southeast part of the state.

Mining of uranium-vanadium ore in southeast Utah goes back to the late 19th century, at the northern end of the Uravan mineral belt (see Uranium mining in Colorado), where it crosses into Grand County, Utah. Uranium occurs in the Salt Wash member of the Morrison Formation of Jurassic age. Because much of the value depended on the vanadium content, the only economic ore minerals were carnotite and tyuyamunite. Following World War II buying for nuclear weapons programs made uranium valuable for its own sake, and attracted hundreds of prospectors to southeast Utah.

By the mid-1950s, almost six hundred producers on the Colorado Plateau were shipping uranium ore. Employment in the industry topped 8,000 workers in the mines and mills. Another bonanza in penny uranium stock established Salt Lake City as "The Wall Street of Uranium." But, by 1964, after producing almost 9 million tons of ore valued at $250 million, the Atomic Energy Commission announced that "it is no longer in the interest of the Government to expand production of uranium concentrate." The market was saturated. There were 71 million tons of reserves--enough to satisfy United States needs through the next four years. For the first time, private enterprise was invited to purchase uranium oxide and the AEC put federal buying on hold. During the late 1960s the industry rallied again with mining by large companies for developing nuclear plants. But the furor was never the same. Ostensibly, the uranium boom was over.