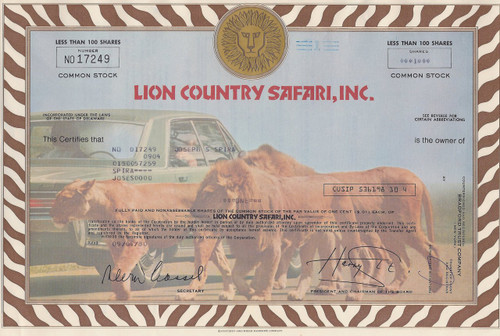 Amazing full color vignette covers the front of the certificate.  A family of lions walks by a passenger car.  The parks once let visitors drive their vehicles into the park among the wild animals.

Lion Country Safari was founded in 1967 by a group of South African, American and British entrepreneurs who wished to provide a safari experience for families who would not normally be able to experience it. The park originally exhibited only lions.

The original park in Florida consists of over 1,000 animals, kept in large fenced areas with approximately 5 miles of paved roadway running throughout. Visitors who purchase a ticket enter the park in their own vehicle, driving slowly at their own pace, and view the animals while listening to a recorded narration on audiotape or CD. Some animals, such as giraffes, rhinoceroses, and zebras, are allowed to roam freely, even crossing the road in front of vehicles. Others, such as lions or chimpanzees, are segregated behind fences or water barriers.

Visitors are warned to drive slowly and carefully, to avoid stopping too close to animals, and not to open their car doors or windows. The lions, whose ability to roam freely with cars was one of the parks original attractions, were separated from visitors by a fence around the road in 2005, due to visitors ignoring warnings and opening their car doors.

After visitors have driven through the park, they can visit Safari World, a theme park with some zoo exhibits, and amusement park fare such as a Ferris wheel, a petting zoo, a small water park, and a giraffe-feeding exhibit. Food is available at Lion Country Safari's main restaurant.