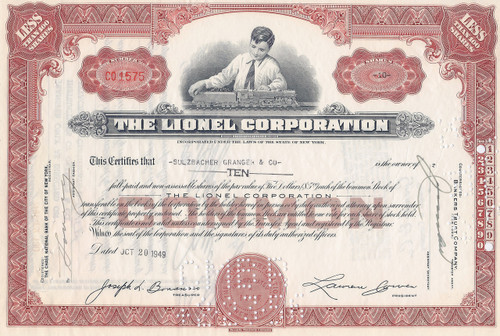 This is a nice older certificate, not often seen. The vignette is the older type of a small boy in a tie playing with a steam locomotive. Classic postwar stock certificate from the Lionel toy train company.

Lionel Corporation was an American toy manufacturer and retailer that was in business from 1900-1993. Founded as an electrical novelties company, Lionel specialized in various products throughout its existence, but toy trains and model railroads were its main claim to fame. Lionel trains, produced from 1900 to 1969, drew admiration from model railroaders around the world for the solidity of their construction and the authenticity of their detail. During its peak years, in the 1950s, the company sold $25 million worth of trains per year  In 2006, Lionel's electric train, along with the Easy Bake Oven, became the first two electric toys inducted into the National Toy Hall of Fame.

The original Lionel Corporation was founded in 1900 by Joshua Lionel Cowen and Harry C. Grant in New York City. Initially, the company specialized in electrical novelties, such as fans and lighting devices. In 1929, Lionel opened a factory in Hillside, New Jersey where it produced trains until 1974.

Lionel's first train, the Electric Express, was not intended for sale to consumers, but rather, as a storefront display. Delivered in December 1900, it operated on a brass track and was powered by a battery and a motor Cowen originally intended to use in an electric fan.

By the end of World War I, Lionel was one of three major U.S. toy train manufacturers, and it grew rapidly due to shrewd marketing. Cowen began getting department stores to incorporate his toy trains into their Christmas tree displays, linking toy trains to Christmas and making them popular Christmas presents. Lionel made its trains larger than its competitors, making them appear a better value.

By the 1920s, Lionel had overcome Ives to become the market leader, selling metal trains with colorful paint schemes. Lionel's fierce ad campaigns took their toll on Ives, which filed bankruptcy in 1928. Lionel and American Flyer bought Ives and operated it jointly until 1930, when Lionel bought Flyer's share. Lionel operated Ives as a subsidiary until 1932.

Lionel ceased toy production in 1942 to produce nautical items for the United States Navy during World War II. The company advertised heavily, however, promising new and exciting products and urging American teenagers to begin planning their post-War layouts. 1942 to 1945 were known as Lionel's "War Era".

In 1959, Cowen and son sold their interest in the Lionel company and retired. The buyer was Cowen's grand nephew Roy Cohn who replaced most of Cowen's management. Lionel's efforts to diversify failed to compensate for the public's declining interest in its toy trains. By 1966, Lionel's revenue was $28 million, 40 percent from government contracts. Meanwhile, Lionel's closest competitor also was fading: in 1967, the parent company of rival American Flyer, the A. C. Gilbert Company, went bankrupt. Lionel bought the American Flyer brand name and product line in May . Lionel lacked the money to exploit them, and filed bankruptcy less than four months later.

In 1970, after tooling purchased from the Lionel Corporation was moved to a new factory in Mt. Clemens, Michigan, limited production of Lionel trains as a new product line under MPC began. In 1974 Lionel began to offer trains in HO scale for the first time since the postwar period where they were last cataloged in 1966. In 1985, General Mills spun off its Kenner-Parker division with Lionel being placed under Kenner-Parker. In 1986 Lionel was sold again, this time to toy-train collector and real estate developer Richard P. Kughn of Detroit, Michigan and became Lionel Trains Inc (LTI).

After a string of unprofitable quarters, it filed for Chapter 11 bankruptcy on June 14, 1991. In 1992, Lionel again tried to reverse its fortunes by merging with the bankrupt Child World, the United States' #3 toy retailer, but was unable to secure financing.