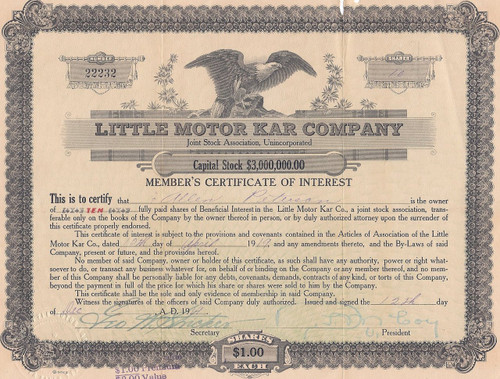 The Little Motor Kar Company was organized in 1919. The company was successful in obtaining the financial support of the community and their product was to be called the "Texmobile", a 27 horsepower vehicle which would sell for $350. The company erected two production building units, each about 500 feet long. This enterprise was too short lived to aid the economic welfare of the community, because, in August 1920, the company passed into the hands of receivership

This unscrupulous company "produced" the Texmobile circa 1920 in Grand Prairie Texas. William S. Livezey was the man behind this operation. The Texmobile was first displayed at the Texas State Fair in Dallas during October 1919.

In 1920 charges were filed against Livezey in regards to how stock was sold to finance the company. Livezey and others were arrested and charged with fraud in April 1920. The trial took place during February 1921. It was discovered that the Texmobile "production" was no more than a few cars in various stages of completion. No two cars were alike. Some parts were forged by Dallas area blacksmiths or taken from cars of competitors.

Livezey was found guilty and sentenced to five years imprisonment in the Federal Penitentiary at Leavenworth, Kansas. The Little Motor Kar Company limped along for a few more years as a maker of road equipment and a small truck called, guess what, the Little.