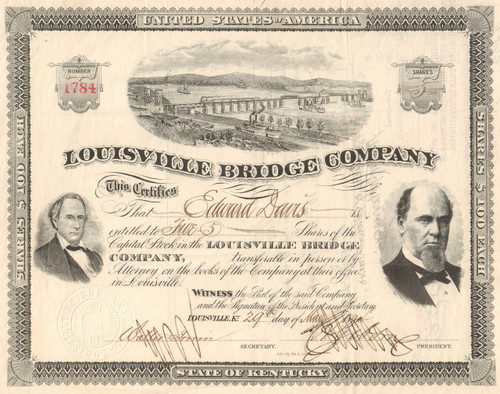 Uncommon bridge cert. This stock has an amazing panoramic vignette of a bridge spanning the Ohio River. Side vignettes of the company founders. Issued and cancelled. Dated 1890's.

There were attempts to build a bridge from Louisville to Indiana as early as the 1830s. James Guthrie, as the head of the Ohio Bridge Company, attempted to build a bridge in 1829. An architect from New England, Ithiel Town, was to build a wooden structure. A cornerstone was laid for the bridge in 1836 by Twelfth Street in Louisville, but the Panic of 1837 stopped further construction. This failure, plus the unsuccessful attempt to woo the capital of Kentucky to Louisville, would become known as "Guthrie's Folly".

By the 1860s, the Louisville and Nashville Railroad and the Jeffersonville and Indianapolis Railroad both desired a railroad bridge across the river. The United States Congress approved the building of such a bridge on February 17, 1865, stating that it must not interfere with river traffic. As there were no bridges across the Ohio River at Cincinnati or any place west, including Louisville, crossing the river during the winter months during the war years stressed the need for such a bridge. The L&N financed the Louisville Bridge Company to begin building such a bridge, with the work beginning on August 1, 1867. Albert Fink was the architect, who used his Fink truss design for the project. At the time it was built, it was the longest iron bridge in the United States, with its 27 spans covering a total mile. It was built high enough to allow steamboats to pass underneath on their way through the Falls of the Ohio along the Portland Canal.

On February 18, 1870, the first train to cross the bridge occurred. Railroad bridges seldom attained formal names, so it quickly was called the "Fourteenth Street Bridge" by locals. Soon, commuters trains would take passengers from Jeffersonville and New Albany to Louisville. The Pennsylvania Railroad purchased the L&N's 60% ownership of the bridge, and with it, control of the bridge in the mid-1870s, after acquiring the tracks between Jeffersonville and Indianapolis. While controlled by the Pennsylvania Railroad, it was called the Pennsylvania Bridge. By 1882 the bridge would be used by trains 150 times a day, with communications between each side of the bridge being done by semaphore.

By the 1900s, the bridge was being used 300 times a day, which was putting more stress on the bridge than it could handle. Between May 1916 and January 1919 a new single-track steel superstructure was placed on the old stone piers. One pier in the middle of the Indiana chute was removed, making one span as long as 645 feet long, improving river navigation. A lift span replaced a swing span that was above the canal. In 1968 a merger between the Pennsylvania Railroad and the New York Central Railroad caused the bridge to be controlled by the new Pennsylvania and New York Central Transportation Company, usually called Penn Central. In 1976 it became under the auspices of the Consolidated Railroad Corporation, known as Conrail. The Louisville and Indiana Railroad attained control of it by purchasing it from Conrail in March 1994, after it acquired Conrail's rail line between Louisville and Indianapolis.