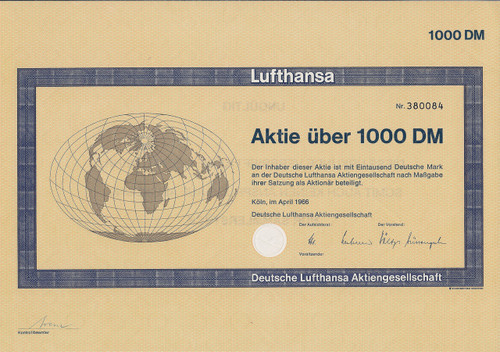 Deutsche Lufthansa AG, commonly known as Lufthansa is a German airline and also the largest airline in Europe, both in terms of overall passengers carried and fleet size when combined with its subsidiaries. It operates services to 18 domestic destinations and 197 international destinations in 78 countries across Africa, the Americas, Asia, and Europe, using a fleet of more than 280 aircraft.

Besides the actual airline named Lufthansa, Deutsche Lufthansa AG is also the parent company for several other airlines and further aviation-related branches, including Swiss International Air Lines, Austrian Airlines, Germanwings and Lufthansa Technik. With over 620 aircraft, it has one of the largest passenger airline fleets in the world when combined with its subsidiaries. In 2012, the entire Lufthansa Group carried over 103 million passengers.

The name of the company is derived from Luft (the German word for "air"), and Hansa (a Latin term meaning "guild" most commonly used historically in reference to the Hanseatic League).

Lufthansa traces its history to 1926 when Deutsche Luft Hansa A.G. (1933 styled as Deutsche Lufthansa) was formed in Berlin. DLH, as it was known for short, was Germany's flag carrier until 1945 when all services were suspended following the defeat of Germany. In an effort to create a new national airline, a company called Aktiengesellschaft für Luftverkehrsbedarf (Luftag), in 1953, with many of its staff having worked for the pre-war Lufthansa. In 1954, Luftag acquired the name and logo from the liquidated Deutsche Lufthansa thus continuing the tradition of a German flag carrier of that name.

On 1 April 1955 Lufthansa got approval to start scheduled domestic flights, linking Hamburg, Düsseldorf, Frankfurt, Cologne, and Munich. International flights started on 15 May 1955, to London, Paris, and Madrid, followed by Super Constellation flights to New York City from 1 June of that year. Due to the special status of that city, Lufthansa was not allowed to fly to either part of Berlin until 1989. Originally thought to be only a temporary matter,the Division of Germany turned out to be long-lasting, which gradually led to Frankfurt Airport evolving into the major hub for Lufthansa.

On March 22, 2005, Swiss International Air Lines was purchased by Lufthansa's holding company. The acquisition included the provision that the majority shareholders be offered payment if Lufthansa's share price outperforms an airline index during the years following the merger. On September 15, 2008, Lufthansa Group announced its purchase of a stake in Brussels Airlines. In September 2009, Lufthansa purchased Austrian Airlines with the approval of the European Commission.