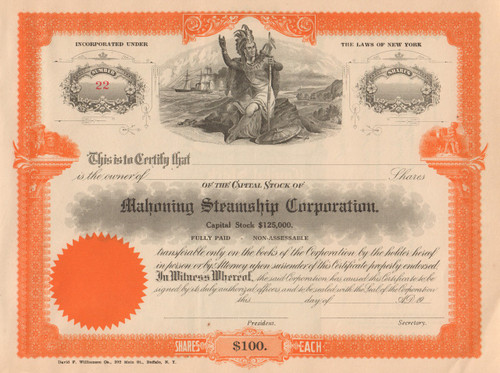 Very nice vignette of an early native American with background of ships at sea and a coastal city. Unissued and not cancelled.   Circa 1910 from company records.

The company ran Great Lakes steamers and ore ships. The company was majority owned by the Cambria Steel Company to ensure transport of raw materials. Mahoning Steamship was based in Cleveland on Lake Erie but operated on a number of the Great Lakes.

The company owned the bulk freighter Charles S Price which hauled coal on the lakes.  It was lost in the lower Lake Huron during the Big Blow of November 1913, having capsized with a load of coal with 28 lives lost. The hull floated several days before sinking.  The site is now a popular dive attraction.