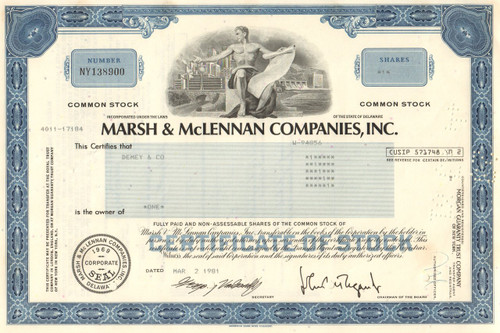 Affordable financial piece with a great engraved vignette of a classical male figure holding a scroll in front of a modern city and hydroelectric dam scenes.  Issued and cancelled.  Dated in the early 1980's.

In August 2007, Marsh completed the sale of its Putnam Investments division to Great-West Lifeco Inc., a financial services holding company controlled by Canada-based Power Financial Corp. after it settled charges of market timing.

At the time of the September 11 attacks in the United States in 2001, the corporation held offices on eight floors of the North Tower of the World Trade Center, from 93 to 100. When American Airlines Flight 11 crashed into the building, their offices spanned the entire impact zone, from floors 93 to 99.[7] Everybody present in the offices at the time of the attack died, and the firm lost 295 employees and 63 contractors.

Marsh & McLennan is a diversified risk, insurance and professional services firm composed of: