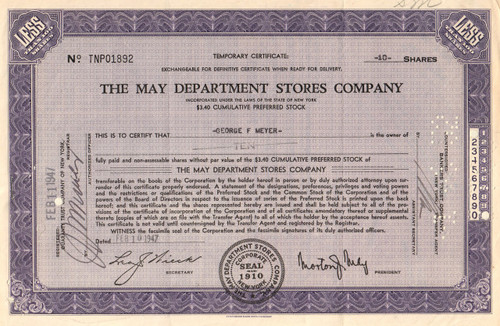 Nice retail collectible.  Plain certificate that comes in colors as shown.  Issued and cancelled. Dated 1940-1950's. Available in purple, red, olive, or set of colors. Printed signature of Morton May as president.

The May Department Stores Company was an American department store holding company, formerly headquartered in downtown St. Louis, Missouri. It was founded by David May in 1877, and merged with Federated Department Stores (now Macy's, Inc.) in 2005.

This company was only a holding company that bought, sold, and merged regional department stores, such as Foley's and L.S. Ayres. During most of its history, the operations of the various divisions were kept separate and had their own buyers and credit cards, which were not accepted at other May owned stores. There were times in which two different May's own stores had operated in the same geographical market but were aimed at different customers.  In 2015, the company closed its stores and again filed for Chapter 11 bankruptcy. Its brand and online operations were acquired by Authentic Brands Group.

David's grandson Morton May became the chairman in 1951 and headed the company for 16 years. Morton May was active in St. Louis civic affairs and was a patron of the St. Louis Art Museum. Venture Stores was founded in 1968 when Target co-founder John F. Geisse went to work for May Department Stores. Under an antitrust settlement reached with the Department of Justice, May was unable to acquire any more retail chains at the time, and the department store company needed a way to compete against the emerging discount store chains.

1986: May acquires the Associated Dry Goods holding company and its chains (including Loehmann's, Lord & Taylor, and Caldor), the largest-ever retail acquisition in history at that time.
1988: May acquires Foley's in Houston and Filene's in Boston from Federated Department Stores.
1993: May Company California and JW Robinsons merged to form Robinsons-May.
1996: May acquires the Strawbridge's chain based in Philadelphia.
1998: May acquires The Jones Store chain based in Kansas City, Missouri.
2004: May Department Stores takes over the Marshall Field's chain from Target Corporation.
2005: May is purchased by Federated Department Stores for $11 billion in stock, with all former May divisions being folded into Federated's various Macy's branches.
2006: Over 400 former May stores, with their wide variety of long-standing brand names, are consolidated and renamed as Macy's. In addition, Federated sells off three former May chains (David's Bridal, Lord & Taylor and Priscilla of Boston).