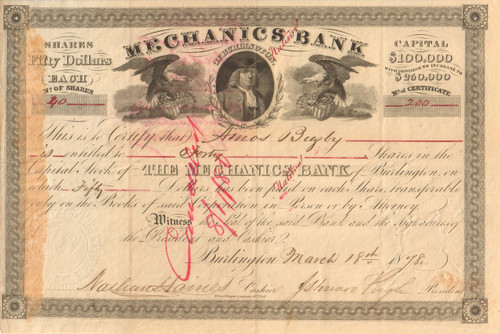 Incorporated 1839, the bank served the Burlington County area of New Jersey near Philadelphia. In 1871, the business became the Mechanics National Bank of Burlington but used the old company stock certificates for years afterwards. The bank merged with Farmers & Mechanics Building & Loan Association and became  the Farmers & Mechanics Bank, headquartered in Burlington, New Jersey and serving greater Burlington County and parts of Camden and Mercer Counties, New Jersey. The name changed to FMS Financial and merged with Beneficial Mutual Bancorp in 2007.