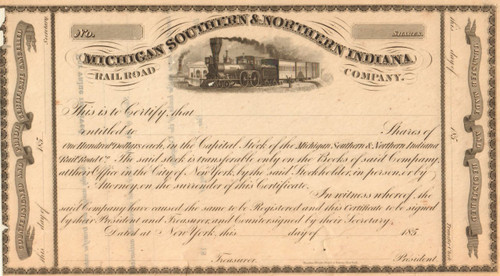 Early American railway certificate with a vignette of a steam train with passenger cars.  Unissued (rare) and not cancelled. Very light paper with chipping into the border. Circa 1850's from issued examples. Dated 185_.

Around 1838, the state of Michigan started to build the Southern Railroad, running from Monroe on Lake Erie west to New Buffalo on Lake Michigan. The first section, from Monroe west to Petersburg, opened in 1839. Extensions opened in 1840 to Adrian and 1843 to Hillsdale. On May 9, 1846, the partially completed line was sold to the Michigan Southern Rail Road, which changed the planned western terminal to Chicago using the charter of the Northern Indiana Railroad. The grading that had been done was not used, as the grade was too steep, and instead the original Buffalo and Mississippi Railroad charter was used west of La Porte, IN. The Michigan Southern leased the Erie and Kalamazoo on August 1, 1849, giving it a branch to Toledo, OH and a connection to planned railroads east from Toledo.

Due to lobbying by the Michigan Central Railroad, a competitor of the Michigan Southern, the latter's charter prevented it from going within two miles of the Indiana state line east of Constantine. However the most practical route went closer than two miles west of White Pigeon. To allow for this, Judge Stanfield of South Bend, IN bought the right-of-way from White Pigeon to the state line, and leased it to the railroad company for about 10 years until the charter was modified to allow the company to own it.

The Northern Indiana and Chicago Railroad was chartered on November 30, 1850. Its initial tracks, from the Michigan Southern at the state line running west-southwest to Elkhart, IN then west through Osceola and Mishawaka to South Bend, IN, opened on October 4, 1851. The full line west to Chicago opened on February 20, 1852, (running to the predecessor of today's LaSalle Street Station, together with the Chicago and Rock Island Railroad north of Englewood, IL). A more direct line was soon planned from Elkhart east to Toledo, and the Northern Indiana Railroad was chartered in Ohio on March 3, 1851. On July 8, 1853, the Ohio and Indiana companies merged.

On February 7, 1855, the Northern Indiana and Chicago Railroad and the Buffalo and Mississippi Railroad were merged into the Northern Indiana Railroad. On April 25, 1855, that company in turn merged with the Michigan Southern Rail Road to form the Michigan Southern and Northern Indiana Railroad. In 1858  the new alignment (Northern Indiana Air Line) from Elkhart, IN east to Air Line Junction in Toledo, OH was completed. The company now owned a main line from Chicago to Toledo, with an alternate route through southern Michigan east of Elkhart, and a branch off that alternate to Monroe, MI. Also included was the Detroit, Monroe and Toledo Railroad, leased July 1, 1856, and providing a branch from Toledo past Monroe to Detroit.