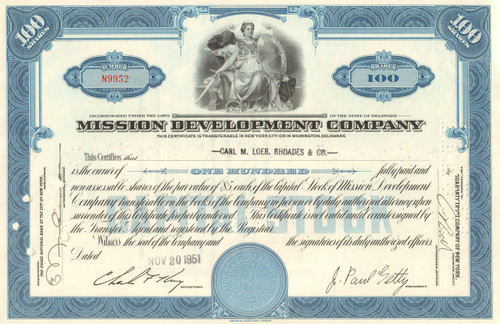 Uncommon version without holes in the vignette (blue/brown). Lower priced option of blue pieces with holes into the vignette available as an ordering option.

In the Depression Getty picked up the Pacific Western Oil Corporation, a holding company with large oil reserves and a heavy cash balance.  Then, in a drawn-out series of maneuvers, he obtained control, by 1953, of the Mission Corporation and its holdings in Tidewater Oil and Skelly Oil Company. These companies with their reserves, refineries and retail businesses eventually became part of a pyramid of corporations, at whose apex stood the Getty Oil Company, which was more than 80 percent owned by Mr. Getty. They constituted the chief ingredients of his fortune in the United States. In a complicated rearrangement in 1967, Mr. Getty merged the Tidewater Oil Company and the Mission Development Company into the Getty Oil company.

Jean Paul Getty (December 15, 1892 – June 6, 1976) was an American industrialist. He founded the Getty Oil Company, and in 1957 Fortune magazine named him the richest living American, while the 1966 Guinness Book of Records named him as the world's richest private citizen, worth an estimated $1.2 billion. At his death, he was worth more than $2 billion. A book published in 1996 ranked him as the 67th richest American who ever lived, based on his wealth as a percentage of the gross national product. Despite his wealth, Getty was known for being a notorious miser. He famously negotiated his grandson's ransom.