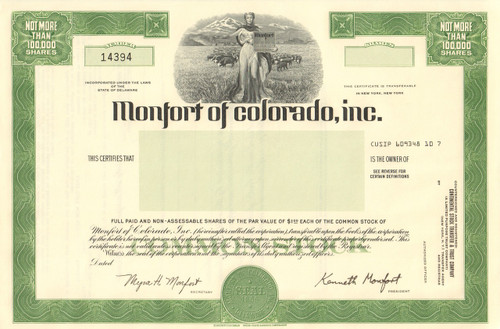 Monfort began in 1930 as founder Warren H. Monfort's cattle feedlot north of Greeley, Colorado. Starting with 18 head in the midst of the Great Depression, Monfort began to buy additional range cattle for his feedlot. During this period, many farmers began to use tractors instead of horses in their fields, creating a huge surplus of corn. By taking advantage of the surplus feed, Monfort became a pioneer in providing packing plants with well-fed cattle year-round. The feedlot grew quickly into one of the largest in the country, with a 3,500-head capacity in the midst of World War II, 8,000 by 1950, and 32,000 by 1960.

During the 1960s the feedlot expanded rapidly into the first 100,000-head feedlot by 1968. Monfort's innovation of slaughtering and processing cattle near where they were fed reduced the overall cost of producing meat through reduced transportation costs and reduced labor costs During the fabrication operation the carcass would be divided into various cuts of beef and boxed ready for shipping directly to restaurants and hotels, a streamlined operation. These new approaches were soon adopted by other meat packers and were possible largely because of improvements in refrigeration, transportation, and the U.S. highway system. In 1969, Monfort expanded vertically once again with the acquisition of its major distributor, Mapelli Brothers Food Distribution Co. The company also added a transportation operation, which was incorporated as Monfort Transportation Co. in 1973.

expanded its plant in Greeley, and added a new line of consumer portion food products to its established boxed beef line. Part of the financing for these projects came from a $16 million stock offering in 1970, which took the company public for the first time under the name Monfort of Colorado, Inc. The following year, the second Monfort generation took over when Warren Monfort retired and his son Kenneth Monfort took over. Annual sales topped $400 million and the company would soon join the Fortune 500.

In 1986,Monfort management was increasingly concerned about consolidation in the meat packing industry. As the two leading companies, Excel Corp.--owned by Cargill Inc.--and Iowa Beef Processors (IBP), continued to grow through the acquisition of smaller packers, company officials feared that the industry was moving toward two-company consolidation and the demise of Monfort. When Excel, the second-largest U.S. meat packer, announced that it would purchase the third-largest U.S. meat packer, the Spencer Beef Division of Land O'Lakes, Monfort filed suit to stop the acquisition. In essence, the company maintained that Excel was attempting to monopolize the meat packing industry in the Midwest through the purchase of smaller companies and construction of new plants near those of its competitors. Although Monfort won an initial judgment and the first Excel appeal, the U.S. Supreme Court in 1986 overturned the original ruling by a vote of six to two.

This ruling played a major role in the company's 1987 decision to agree to a buyout by ConAgra, Inc. In the midst of a spate of takeovers following the 1986 court ruling, ConAgra, a diversified food conglomerate based in Omaha, acquired Monfort in a May 1987 stock swap valued at $295.6 million. ConAgra was an established powerhouse in chicken, had purchased 21 Armour meat-processing facilities in 1984, and now added the vertical meat holdings of Monfort to its food empire. Monfort president Ken Monfort cited three reasons for the sale: a "fair" price offered by ConAgra, Inc.

Monfort grew substantially through additional ConAgra acquisition activity. Following the acquisition, ConAgra set up a ConAgra Red Meat Companies subsidiary, which included Monfort. Ken Monfort was named head of the new ConAgra subsidiary, while a third generation of Monforts took over Monfort of Colorado with the ascent of Richard L. Monfort, Ken's son. Later in 1987 a long-planned third 100,000-head cattle feedlot finally opened near Yuma, in eastern Colorado. More significantly, ConAgra made its second major meat company acquisition of the year in October with the purchase of the Swift Independent Packing Company (SIPCO). In March 1988 ConAgra merged some of the SIPCO holdings--including three beef plants, three pork plants, and one lamb plant--into Monfort.

As Monfort moved into the final phases of its integration into ConAgra in the early 1990s, a new company emphasis on public relations seemed to point to the company's future. Richard Monfort announced in June 1995 that he was stepping down from his leadership of ConAgra Red Meat Companies, to be replaced by Kevin LaFleur, many called it the end of an era.

Charles K. "Charlie" Monfort and Richard L. "Dick" Monfort are the primary owners of the Colorado Rockies Major League Baseball team. Both grew up in Greeley, Colorado and are sons to Kenneth Monfort; previous owner of Monfort of Colorado, Inc. a meatpacking and distributing company that was acquired by ConAgra Foods in 1987. Dick Montfort is managing general partner, chairman and chief executive officer, while Charlie Montfort is the team's other general partner and vice chairman.