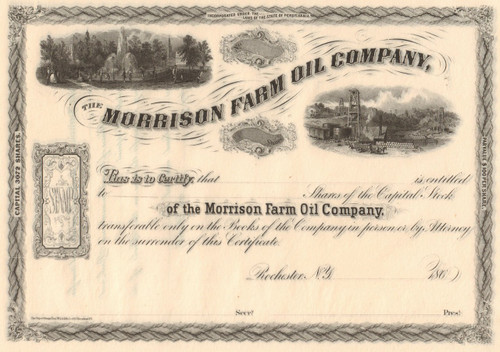 Great double vignette of a fountain in a city park and a very early oil well scene.  Unissued and not cancelled. Circa 1865 from issued examples. Dated 186_.

Incorporated December 1865 in Pennsylvania, this company had its headquarters in Rochester NY but had oil drilling in Venango County, Pennsylvania. While its initial well was 700 feet deep, it took some time for the company to strike in Western PA (near Titusville).  The original enterprise was part of the oil rush in the 1860's but, from initial performance, they were not as adept on finding and producing saleable oil.