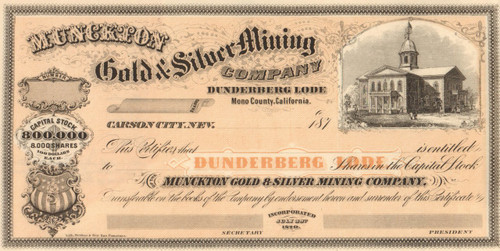 Beautiful certificate with a nice engraving of the Mono County court house of the time.  Very nice printing throughout including detailed filigree around the company name.  Unissued and not cancelled. Smaller certificate, measuring  5" by 10". Circa 1870 from company records.  Dated 187_.

This company mined the Dunderberg Lode in  Mono County, California. Ore was hauled about 30 miles to Aurora, California. The gold was found in a long vein of solid quartz.   The Dunderberg was considered one of the most important mines of Mono County by Raymond in 1873. Located on Castle Peak in the headwaters of the East Walker River, the mine was discovered in the 1860's and purchased by Dr. George Munckton and others of Carson City, Nevada. Their enterprise was named after him, but the mine name remained the Dunderberg.

The ore was first shipped to Aurora, where they were paid $50 per ton, which was about 75% gold and 25% silver. The company ran over 1000 feet intersecting the lode at various points. The operations remained active until 1902, when the property became idle.