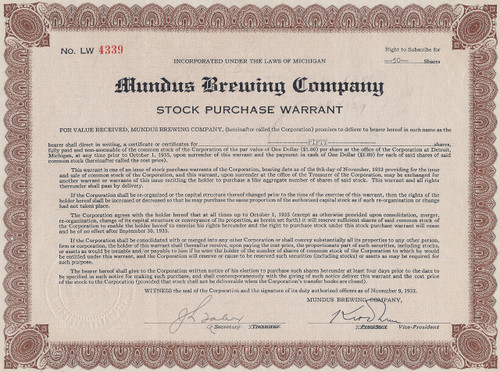 Plain but highly collectible cert from a Detroit brewery.  this is a very tough find with an interesting history including ties to Preston Tucker (auto maker).  Dated November 9, 1932 in preparation for the issuance of stock (50 shares) in the new company.

Mundus Brewing Co. Inc. opened in 1933-1938. Breweries that are only open for a couple of years like this did not have a long time to produce advertising and collectibles so they tend to be more scarce than breweries with more longevity.

This listing was active during Prohibition which makes it an oddity. Some breweries were able to stay in business by producing "near-beer" which was very low alcohol, some switched over to bottling sodas or other beverages, some became Ice-houses or other related businesses. Mundus Brewing Co. Inc. was in an active brewing city. Detroit, MI was listed as having 110 breweries, which is quite a few.

Their delivery trucks were designed by Preston Tucker  with self loading system for kegs. Tucker was famous for the postwar Tucker Torpedo auto which only made 50 cars.