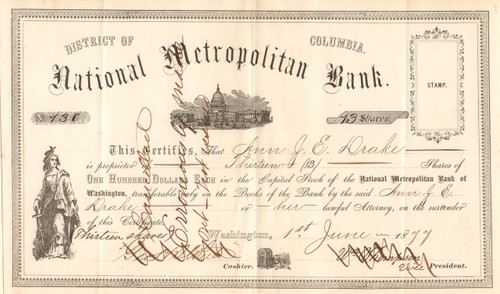 Nice DC banking piece with multiple vignettes of the Capitol building and an early interpretation of Liberty holding a sword.  Issued and cancelled. Dated 1877.

Organized in January 1814, the National Metropolitan Bank was reorganized in 1865 under the National Banking Act, and in 1907.  The Bank of the Metropolis, as it was originally called, opened for business in March 1814; its original building was the historic Rhodes Tavern.

Of course, 1814 was not an auspicious year to start a business in Washington. Only five months after the bank took up residence in Rhodes Tavern, the British arrived and methodically burned the public buildings of Washington. After they set the Treasury Department building and the White House on fire, they considered torching Rhodes Tavern as well. However a certain Sarah Sweeny, a “woman of reduced circumstances” who worked as a custodian for the bank, fended them off and saved the building. Sweeny was later awarded $100 by the bank “for her friendly agency in interceding with some British officers…to prevent the conflagration of the Banking House,” according to the Daily National Intelligencer. The bank went on to loan the government $100,000 to aid in rebuilding the public buildings of Washington destroyed by the British.

In 1836 the bank moved half way up the block to its final location at 613 15th Street NW, occupying another Federal style building not unlike Rhodes Tavern. That same year President Andrew Jackson made the bank the depository for federal funds after he refused to extend the charter of the Bank of the United States. The bank flourished here for many decades and through the ups and downs of prosperity and financial crises, being renamed and reorganized in 1865.

The National Metropolitan Bank remained in business until 1958, when it merged with the American Security & Trust Company.