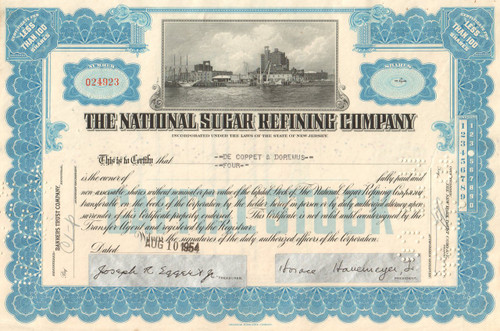 As a result of a sugar price war, the few independent refineries that were built in the 1890s began to experience financial difficulties. Taking advantage of this, H.O. Havemeyer moved to acquire the remaining independent firms: the Mollenhauers Refinery in Brooklyn, National Sugar Company in Yonkers, New York Refining Company in Long Island City. He did so anonymously, using James H. Post, partner in the independent sugar broker firm B. H. Howell, Son & Company.

National Sugar was bankrupt by 1984.  The company was privately owned at the end, having been purchased by in 1975 for $19.5 million dollars by NUNA Corp. The company's reasons for closing was the changing habits of Americans' diets, increasing competition from producers of high-fructose corn syrup, which had become a staple for industrial users, plus the fact that there was an oversupply on the market.