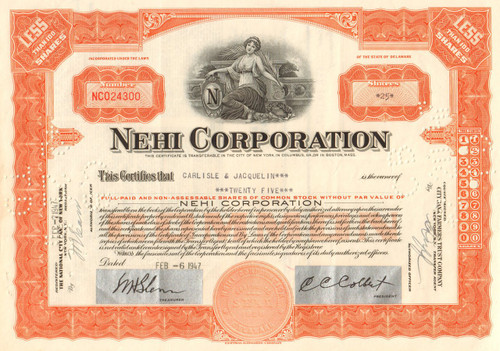 Nehi is a flavored soft drink that originated in the United States. It was introduced in 1924 by Chero-Cola/Union Bottle Works. The Nehi Corporation name was adopted in 1928 after the Nehi fruit-flavored sodas became popular. In 1955, the company changed its name to Royal Crown Company, after its RC Cola brand. In April 2008, Nehi became a brand of Dr Pepper Snapple Group in the United States.

The Chero-Cola company added Nehi Cola to its line of sodas in 1924 in order to offer a broader variety of flavors. It offered orange, grape, root beer, peach, and other flavors of soda. Nehi was instantly successful and outsold Chero-Cola entirely. The company changed its name to Nehi Corporation in 1928 and was listed on the New York Curb Exchange. Business went well until 1930 when a major crisis occurred. Reflecting the Great Depression, which followed with the stock market crash of October 1929, Nehi Corporation's sales figures dropped by $1 million in 1930 from a high of $3.7 million in the previous year.

By 1933, the low point had been passed, and the business was stabilizing when Claud A. Hatcher, the company's president, died suddenly December 31, 1933. Hatcher was soon replaced by H. R. Mott, vice president of the Nehi Corporation for several years beforehand. He updated operations, obtained extensions of credit, and cut expenses. Within a year, the Nehi Corporation was debt-free and ready to move ahead once more.

In the early 20th century, the national advertising logo of Nehi was typically a picture of a seated woman's legs, in which the skirt was high enough to show the stockings up to the knee, suggesting the phrase "knee-high" to illustrate the correct pronunciation of the company name. Robert Ripley helped the Nehi Corporation, when he advertised for them on his radio show Ripley's Believe It or Not!. By 1940, Nehi products were available in forty-seven of the forty-eight states.

In 1946, the pace for the corporation accelerated tremendously. The company began to enhance its advertising by using celebrities. Bing Crosby, Joan Crawford, Bob Hope, and many others joined in selling the products of Nehi Corporation. When World War II was over, the company and its bottlers joined whole-heartedly in a progressive program of expansion and improvement that made 1947 one of the great years in the history of the enterprise. In that year, glamorous Hedy Lamarr was pictured in point of purchase advertising signs. At that time, Nehi Corporation offered more than ten flavors. Those included Dr. Nehi, Nehi Chocolate, Nehi Root Beer, Nehi Lemonade, Nehi Wild Red, Nehi Blue Cream, and its more classic flavors Nehi Orange, Nehi Grape, and Nehi Peach.