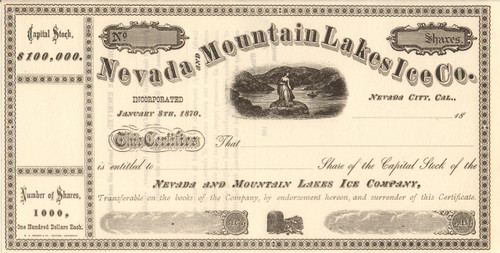 Incorporated 1870 in Nevada City CA, the business had operations at Pacific, one mile below Prosser Creek and eight miles below Truckee.  The ice was transported from its Sierra Nevada location to its customers, mostly saloons, bars, and restaurants in the San Francisco area. It was also used in the mines of the Comstock where temperatures could soar.

The ice industry began at Truckee in 1868 when the Truckee Ice Co. and Boca Ice began operations. According to MaCauley, Truckee’s senior historian, in the late 19th century, ice was a luxury for the wealthiest, and was used mainly in upscale San Francisco hotels and bars. It was also used in the mines of the Comstock where temperatures could soar. The ice was also used to keep fruit cool in railcars headed east onboard the Pacific Fruit Express.