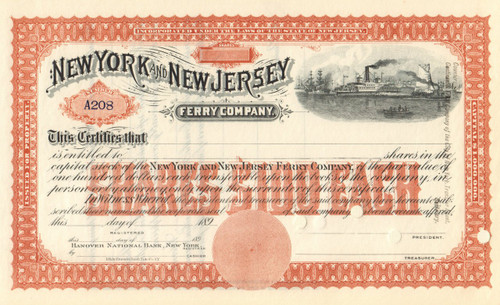 Great nautical collectible with a fantastic engraved vignette of steam and sailing ships on the Hudson River.  Unissued and cancelled. Smaller certificate, measuring  6.5" by 11". Circa 1895 from issued examples.  Dated 189_.

Incorporated in New Jersey in 1895, the company operated along the Hudson River connecting New York (23rd Street) to the Jersey suburbs.  It shared its Hoboken 14th Street docks with the New York and Hoboken Ferry company with which it later merged.  The company offered ferry services on the Hudson River. It lost importance after the Hudson Tunnel was finished.