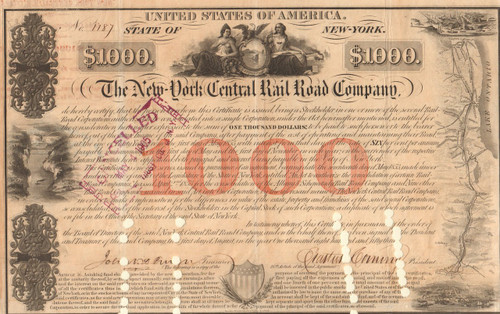 Great historical bond with multiple vignettes of the NY state seal and a view of the Hudson River. Issued and cancelled. Dated 1853. Signed by Erastus Corning as president (cancellation holes as pictured).

Erastus Corning (1794-1872), prominent in railroad development in the state of New York. He became the first President of the New York Central in 1853. He was four times elected Mayor of Albany and twice as a Democratic Representative in Congress.

Erastus Corning's most lasting contribution to history may have been his dealings with railroads. When the Utica and Schenectady Railroad was chartered in 1833, Corning got himself a seat on the board and became a major investor, and was soon president of the road. Corning ran the Utica & Schenectady for twenty years. The railroad eventually boasted 78 miles (126 km) of track, from Schenectady in the east (where the road interchanged with the smaller Mohawk and Hudson Railroad of which Corning was also a shareholder) to Utica in the west. In 1851, the road's name was changed to the Mohawk Valley Railroad. As president of the Utica & Schenectady, Corning organized in 1851 a convention of the owners and presidents of the other eight operating railroads, which combined roughly connected the cities of Albany and Buffalo, New York. The convention agreed on a framework for consolidation of the eight roads (as well as two "paper" roads, which had not yet been built but were planned), and Corning took the convention's application to the state Legislature. Corning became the main lobbyist for the proposal in the legislature, and despite being a Democrat made a personal appeal to Thurlow Weed, leader of the Whigs, who controlled state government at the time.

Corning had a lot riding on the legislature's decision. He had organized the convention and largely dictated the terms of the merger to the other companies. Once the legislature passed the Consolidation Act on April 2, 1853, Corning found himself in possession of the majority of shares in the new company, and so at the first meeting of the New York Central's shareholders in 1853, Corning got himself elected president of the company. He remained in that role for twelve years, during which time the New York Central made connections and struck deals that gave the road access to Cleveland, Boston, New York City, and Chicago, and made it one of the country's most important railroads.

In broad geographic terms, the New York Central proper was everything east of Buffalo plus a line from Buffalo through Cleveland and Toledo to. NYC included the Ohio Central Lines and the Boston & Albany Railroad. The Michigan Central Railroad was a Buffalo-Detroit-Chicago line and everything in Michigan north of that. NYC's Grand Central Terminal in New York City is one of its best known extant landmarks.

The New York Central System was the final name change, which took place in the summer of 1935. The NYCS was the largest of the eastern trunk systems from the standpoint of mileage and second only to the PRR in revenue.  NYC did not share as fully in the post–World War II economic expansion because of rising labor and material costs and an extensive improvement program, especially for passenger services. Despite having several modern steam locomotives, NYC's poor financial position caused it to convert to more economical diesel-electric power rapidly.