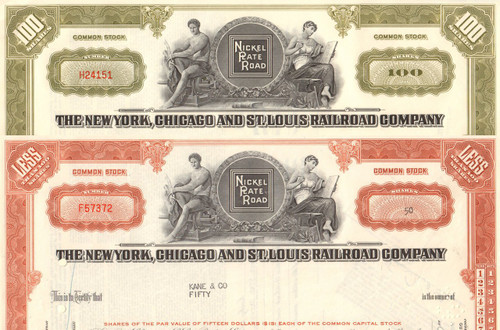 Tremendous vignette of the classic logo for the railroad "Nickel Plate Road", flanked by two allegorical figures.  This listing is for the set of 2 colors. Issued and cancelled. Dated in the 1950's and 1960's. Individual pieces can be purchased from the Railroad category.

The New York, Chicago and St. Louis Railroad was a railroad that operated in the mid-central United States. Commonly referred to as the Nickel Plate Road, the railroad served a large area, including trackage in the states of New York, Pennsylvania, Ohio, Indiana, Illinois and Missouri. Its primary connections included Buffalo, Chicago, Cincinnati, Cleveland, Indianapolis, St. Louis, and Toledo.

The Nickel Plate Railroad was constructed in 1881 along the South Shore of the Great Lakes connecting Buffalo and Chicago to compete with the Lake Shore and Michigan Southern Railway. In 1964 the Nickel Plate Road and several other mid-western carriers were merged into the larger Norfolk and Western Railway. The goal of the N&W expansion was to form a more competitive and successful system serving 14 states and the Canadian province of Ontario on more than 7,000 miles of railroad. The profitable N&W was itself combined with the Southern Railway, another profitable carrier, to form Norfolk Southern Corporation in 1982.

Jay Gould and William Vanderbilt together oversaw all east-west rail traffic in the mid-west. The Seney Syndicate, owners of a 350-mile railroad, the Lake Erie and Western Railroad, were interested in tapping new sources of revenue. The stage was set for the creation of the New York, Chicago and St. Louis Railroad. The Seney Syndicate, headed by George I. Seney, met at Seney's New York bank and organized the New York, Chicago and St. Louis Railway Company on February 3, 1881. The original proposal for the NYC&StL was a 340-mile railroad west from Cleveland, Ohio to Chicago, Illinois with a 325-mile branch to St. Louis, Missouri.

The cost of construction was higher than expected and the Seney Syndicate began to negotiate with Gould to purchase the railroad, but unlike Vanderbilt, Gould lacked the capital. Frustrated at the failing talks, Gould broke off negotiations and gave up on his attempt to break Vanderbilt.

On October 25, 1882, (a few days after the first trains ran) the Seney Syndicate sold the Nickel Plate to Vanderbilt for $7.2 million who transferred it to his Lake Shore and Michigan Southern Railway. Vanderbilt kept most of the rail traffic on his Lake Shore and Michigan Southern. Vanderbilt consolidated many of his railroads into the New York Central Railroad. Over time, the Nickel Plate was reduced as a serious threat to the New York Central and other competing lines.

The Lake Shore and Michigan Southern Railway was controlled by the New York Central Railroad's Alfred Holland Smith, a close friend of the Van Sweringens. In late 1915, the Attorney General of the United States advised the New York Central that its control of the Lake Shore and Michigan Southern and the Nickel Plate was in violation of the Federal antitrust laws. Alfred Smith called his friends, the Van Sweringens on February 1, 1916 and offered them the Nickel Plate.

As the financial situation of American railroading continued to decline after World War II, the Nickel Plate Road together with the Wabash and several smaller carriers merged with the profitable Norfolk and Western (N&W) on October 16, 1964. N&W had merged with long-time rival Virginian Railway in the Pocahontas coal region in 1959, and grew through the mergers with other rail carriers including the Nickel Plate and Wabash railroads with operations in adjacent areas of the eastern United States to form a more competitive and successful system serving 14 states and a province of Canada on more than 7,000 miles of road.

The profitable N&W was itself combined with the Southern Railway, another profitable carrier, to form Norfolk Southern Corporation (NS) in 1982.