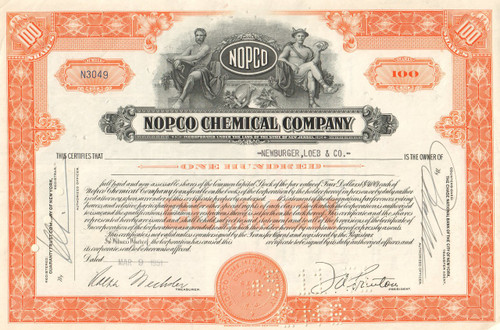 Incorporated in 1912, NOPCO was formed in Harrison, NJ.  It eventually merged with Diamond Shamrock in 1967.  The New Jersey company produced of a wide range of inorganic and organic chemicals.

Diamond Shamrock was one of the major oil-refining and marketing companies in Texas in 1993.  A group of glass manufacturers founded Diamond Alkali in Pittsburgh, Pennsylvania, in 1910 to produce soda ash, an important component in the glass industry. A large industrial plant was built at Painesville, Ohio, in 1912, and in the 1920s, under the leadership of T. R. Evans, Diamond Alkali developed into an important chemical company. It diversified into the production of calcium carbonates, coke, cement, chlorine, and a variety of other products.

In 1946, in Deer Park, Houston, Texas, construction was started on a new plant to produce chlorine and caustic soda. Diamond Alkali changed its headquarters from Pittsburgh to Cleveland, Ohio, in 1948. A third plant was erected in Muscle Shoals, Alabama, in the 1950s, and Diamond Alkali further extended its range of products into plastics and agricultural chemicals.

In the 1960s the company opened another facility in Delaware City, Delaware, and purchased several additional chemical companies, including the Chemical Process Company of Redwood City, California, and the NOPCO Chemical Company of New Jersey (known as the National Oil Products Company until 1947). In spite of its growth, Diamond Alkali feared absorption by a larger chemical firm or by one of the major oil conglomerates, and in 1967 it merged with Shamrock Oil and Gas of Amarillo to increase its corporate strength.