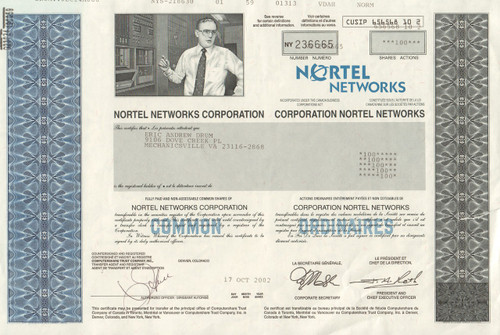 Great telecom bomb stock cert from one of the big names.  Nice vignette of telecommunications technician in front of old switch gear.  Issued and not cancelled. Small tear in right border that does not show when flat. Dated 2002.

Nortel Networks Corporation, formerly known as Northern Telecom Limited and sometimes known simply as Nortel, was a multinational telecommunications and data networking equipment manufacturer headquartered in Mississauga, Ontario, Canada. It was founded in Montreal, Quebec in 1895. At its height, Nortel accounted for more than a third of the total valuation of all the companies listed on the Toronto Stock Exchange (TSX), employing 94,500 worldwide.

On January 14, 2009, Nortel filed for protection from its creditors in the United States, Canada, and the United Kingdom, in order to restructure its debt and financial obligations. In June 2009, the company announced it would cease operations and sell off all of its business units. The period of bankruptcy protection was extended to February 2, 2013. As part of the bankruptcy proceedings in the United States, Nortel Networks Inc. publishes monthly operating reports outlining cash receipts and disbursements.

In 1976, the company name was changed to Northern Telecom Limited, and management announced its intention to concentrate the company's efforts on digital technology. Northern Telecom was the first company in its industry to announce and to deliver a complete line of fully digital telecommunications products. The product line was branded "Digital World" and included the well known DMS-100, a fully digital central office switch serving as many as 100,000 lines, which was a key contributor to the company’s revenue for close to 15 years.

Starting in 1977, Nortel grew rapidly after the introduction of its DMS line of digital central office telephone switches, especially after the AT&T breakup in 1984. Northern Telecom became a significant supplier in Europe and China and was the first non-Japanese supplier to Nippon Telegraph and Telephone.

In 1998, with the acquisition of Bay Networks, the company's name was changed to Nortel Networks to emphasize its ability to provide complete solutions for multiprotocol, multiservice, global networking over the Internet and other communications networks. As a consequence of the stock transaction used to purchase Bay Networks, BCE ceased to be the majority shareholder of Nortel.