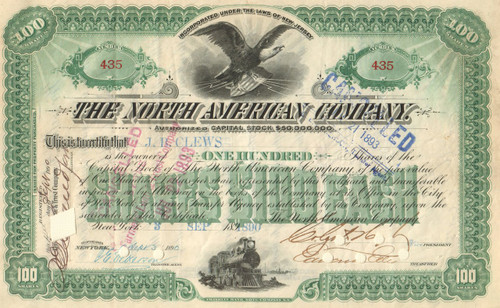 Nice utility stock endorsed on the back by Henry Clews.   Double vignette of eagle at the top and a steam train at the bottom. Over 100 years old.  Issued and cancelled.  Dated 1890-1891.

Henry Clews was an American financier and author. He was born in August 14, 1834 in Staffordshire, England, and emigrated to the United States in 1853. His first job was at an import business, working as a junior clerk. In 1859 he co-founded Livermore, Clews, and Company, what was then the second largest marketer of federal bonds during the United States Civil War. He split away and started Clews and Company in 1877.

Henry Clews organized the "Committee of 70," which deposed the corrupt ring associated with William M. Tweed in New York City, and he served as an economic consultant to President Ulysses Grant. He married the American woman Lucy Madison Worthington; they had two children: Elsie Worthington Clews, an anthropologist, and Henry Clews Jr. (1876–1937), an artist. Towards the end of his life he wrote one of the most famous classics about life on Wall Street entitled "Fifty Years in Wall Street". He died of bronchitis in New York City, New York on January 31, 1923.

The North American Company was a holding company incorporated in New Jersey on June 14, 1890, and controlled by Henry Villard, to succeed to the assets and property of the Oregon and Transcontinental Company. It owned public utilities and public transport companies and was broken up in 1946, largely to comply with the Public Utility Holding Company Act of 1935.

In 1889 New Jersey passed legislation to facilitate the control of other companies by another corporation with a goal of encouraging trusts to convert into holding companies and relocate to that state. To take advantage of these expanded corporate powers, in 1890 Oregon and Transcontinental, which was an Oregon corporation, re-incorporated as a holding company in New Jersey and became the North American Company. By 1940, North American was a US$2.3 billion holding company directly and indirectly heading up 80 companies. It controlled ten major direct subsidiaries in eight of which it owned at least 79%. Three of the ten were major holding companies:

Four of the ten direct subsidiaries were operating companies:

The remaining three of the ten direct subsidiaries were:

North American's stock was one of the twelve component stocks of the May 1896 original Dow Jones Industrial Average, but it was replaced later that same year. In 1928, when the number of stocks comprising the DJIA was increased to 30, North American was re-added to the list but was replaced again in 1930. The two periods when it was a component were: