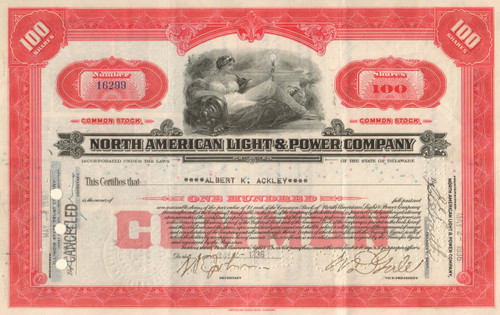 Wonderful collectible piece with a classic vignette of a reclining Greek female figure leaning against an electric generator and holding a lit light bulb.  Smaller certificate measuring  7" by 11". Red version is issued and cancelled; orange version is unissued and crisp. Dated 1940's.

The North American Light and Power Company was a utility holding company formed in South Bend, Indiana and run since 1916 by its President, Clement Studebaker, Jr., of the family famous for the Studebaker automobiles. The utility company remained a major subsidiary of the North American Company, until that conglomerate's 1940s breakup by the U.S. Securities and Exchange Commission.

Clement Studebaker, Jr. also served as President and Chairman of the Board of the Illinois Power and Light Company (and of its subsidiary, the Illinois Traction Company), the South Bend Watch Company, and as Treasurer of the Chicago South Shore and South Bend Railroad