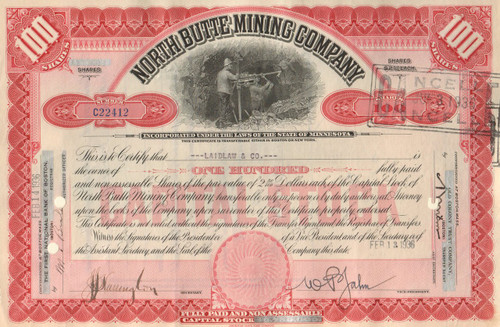 The North Butte Mining Company, in Butte, Montana, was incorporated under Minnesota law on April 1, 1905, by Charles A. Duncan, Louis W. Powell, and Joseph B. Cotton. James Hoatson of Calumet, Michigan, was president of the company with Charles Duncan, Joseph Cotton, and Frederick R. Kennedy, all of Duluth, Minnesota, as officers and Arthur C. Carson as the first general manager.

In 1912 Thomas F. Cole replaced James Hoatson as president. He continued as president until 1919 when Robert Linton took over the presidency. Frederick R. Kennedy served as secretary-treasurer of the company from its inception until the late 1920s. Management of the mines in Butte was conducted by A.C. Carson until 1909 when operation was taken over by John D. Pope. In 1915 Norman B. Braly became general manager with Lester D. Frick as assistant manager.

In June, 1905, the company bought the properties of the Speculator Mining Company which had previously been owned by the P.A. Largey Estate. Among the properties acquired were the Speculator, Edith May, Jessie, Copper Dream, and Miner's Union claims. The company contracted with the Washoe Copper Company to process the copper ore, thus eliminating the need to expend large amounts of money building reduction and smelting facilities. The first year the mines produced over 30 million pounds of copper worth $5 million and paid dividends of $1 million, an almost unheard of amount for a new mining company. Production hit a peak in 1909 with 33 million pounds of copper and dividends of $1.6 million. By 1911 the investors' $6 million investment in stock had been paid off.

In 1913 the North Butte Mining Company acquired massive holdings in the East Side Mineral Area. This acquisition more than doubled the number of claims being worked by the company.

After the end of World War I, copper prices dropped dramatically. During the period of 1920 to 1923 the company was operating at a loss, and production was sharply curtailed. In March of 1921 production ceased and the mine closed until June of 1922. From then on the mine produced only sporadically, mostly through leasors. In 1942 the Anaconda Company leased the Speculator and Granite Mountain mines; around 1952 they purchased the property. Much of the company's east side property became part of the Berkeley Pit.