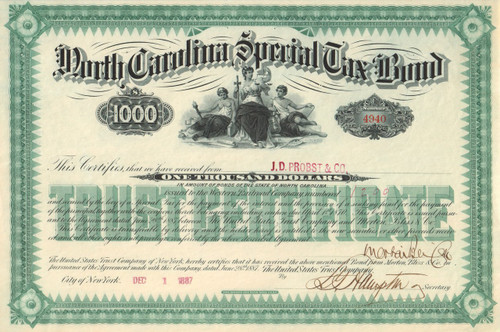 The Western Railroad was a railroad in North Carolina connecting Fayetteville to the coal fields of Egypt (now Cumnock). A group of Fayetteville citizens obtained a charter from the North Carolina legislature in December 1852 to construct a railroad from Fayetteville to the coal fields of Chatham County (now Chatham, Moore, and Lee counties). The state helped finance, build, and operate the new railroad. Problems with the construction contracts and obtaining rights of way delayed its construction, the first rails being laid in 1858. It was not completed until the first part of the American Civil War. Its first operations in commenced in 1861 to McIver's Depot, and the line was completed to Egypt in 1863.

In 1862 Mallett, in partnership with James Browne of Charleston, South Carolina, took over management and operation of the Egypt Coal Mines. These mines had been owned by a Philadelphia-based company, and had been placed into receivership by the Confederate government at the start of the war. The facilities of the railroad were used to transport the coal to Fayetteville, where it was then moved down the Cape Fear River to its contracted final destination of Wilmington, North Carolina. In 1865 Gen. Sherman's army reached Fayetteville. During his campaign Sherman burned or destroyed several of the bridges used by the railroad, 12 miles of track, and several depots. Its rolling stock was saved, having been moved to the Egypt end of the line. By 1868, his other businesses and personal residence also destroyed by Sherman's campaign, Mallett was forced into bankruptcy. The line resumed operations in 1868. In the following two years, additional connections were made to the railroad, and it continued operations for another 11 years. In 1879 the railroad was renamed Cape Fear and Yadkin Valley Railway and absorbed the Mount Airy Railroad. The holding company name lasted until the 1890's.

North Carolina is a state in the southeastern region of the United States. The state borders South Carolina and Georgia to the south, Tennessee to the west, Virginia to the north, and the Atlantic Ocean to the east. North Carolina is known as the Tar Heel State and the Old North State. North Carolina is composed of 100 counties. Its two largest metropolitan areas are among the top ten fastest-growing in the country: its capital, Raleigh, and its largest city, Charlotte. In the past five decades, North Carolina's economy has undergone a transition from reliance upon tobacco, textiles, and furniture-making to a more diversified economy with engineering, energy, biotechnology, and finance sectors.

Spanish colonial forces were the first Europeans to make a permanent settlement in the area, when the Juan Pardo-led expedition built Fort San Juan in 1567 at the site of the Native American community of Joara, a Mississippian culture regional chiefdom in the western interior, near the present-day city of Morganton. The fort lasted only 18 months; the local inhabitants killed all but one of the 120 men Pardo had stationed at a total of six forts in the area.

After the Spanish in the 16th century, the first permanent European settlers of North Carolina were English colonists who migrated south from Virginia. The latter had grown rapidly and land was less available. Nathaniel Batts was documented as one of the first of these Virginian migrants. He settled south of the Chowan River and east of the Great Dismal Swamp in 1655. By 1663, this northeastern area of the Province of Carolina, known as the Albemarle Settlements, was undergoing full-scale English settlement. During the same period, the English monarch Charles II gave the province to the Lords Proprietors, a group of noblemen who had helped restore Charles to the throne in 1660. The new province of "Carolina" was named in honor and memory of King Charles I (Latin: Carolus). In 1712, North Carolina became a separate colony. Except for the Earl Granville holdings, it became a royal colony seventeen years later. In 1718, after losing his ship and appealing to the governor of North Carolina who promised safe-haven and a pardon, the notorious pirate, Blackbeard (Edward Teach) was killed in an ambush by British soldiers.

North Carolina became one of the English Thirteen Colonies and with the territory of South Carolina was originally known as the Province of Carolina. The northern and southern parts of the original province separated in 1729. Originally settled by small farmers, sometimes having a few slaves, who were oriented toward subsistence agriculture, the colony lacked cities or towns. Pirates menaced the coastal settlements, but by 1718 the pirates had been captured and killed. Growth was strong in the middle of the 18th century, as the economy attracted Scots-Irish, Quaker, English and German immigrants. The colonists generally supported the American Revolution, as the number of Loyalists was smaller than in some other colonies.

During colonial times, Edenton served as the state capital beginning in 1722, and New Bern was selected as the capital in 1766. Construction of Tryon Palace, which served as the residence and offices of the provincial governor William Tryon, began in 1767 and was completed in 1771. In 1788 Raleigh was chosen as the site of the new capital, as its central location protected it from attacks from the coast. Officially established in 1792 as both county seat and state capital, the city was named after Sir Walter Raleigh, sponsor of Roanoke, the "lost colony" on Roanoke Island.

On May 20, 1861, North Carolina was the last of the Confederate states to declare secession from the Union, 13 days after the Tennessee legislature voted for secession. Some 125,000 North Carolinians served in the military; 20,000 were killed in battle, the most of any state in the Confederacy, and 21,000 died of disease. The state government was reluctant to support the demands of the national government in Richmond, and the state was the scene of only small battles.