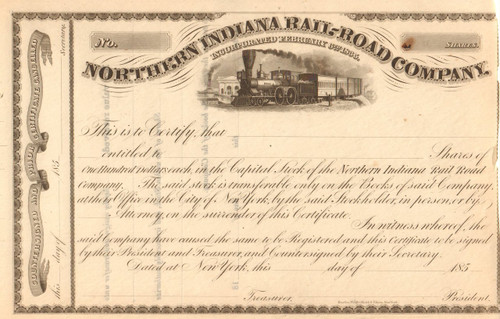 Rare railroad stock with a beautiful vignette of very early steam train. Over 150 years old.  Unissued and not cancelled.  Delicate paper with chipped edges into the right border. Dated 185_.

The Buffalo and Mississippi Railroad was chartered in Indiana on February 6, 1835, to run from Buffalo, New York, to the Mississippi River. The name was changed February 6, 1837, to the Northern Indiana Railroad, which would run from the eastern border of Indiana west to Michigan City on Lake Michigan. Some grading between Michigan City and La Porte was done in 1838, but money ran out.

Around 1838, the state of Michigan started to build the Southern Railroad, running from Monroe on Lake Erie west to New Buffalo on Lake Michigan. The first section, from Monroe west to Petersburg, opened in 1839. Extensions opened in 1840 to Adrian and 1843 to Hillsdale. On May 9, 1846, the partially completed line was sold to the Michigan Southern Rail Road, which changed the planned western terminal to Chicago using the charter of the Northern Indiana Railroad. The grading that had been done was not used, as the grade was too steep, and instead the original Buffalo and Mississippi Railroad charter was used west of La Porte, IN. The Michigan Southern leased the Erie and Kalamazoo on August 1, 1849, giving it a branch to Toledo, OH and a connection to planned railroads east from Toledo.

The Northern Indiana and Chicago Railroad was chartered on November 30, 1850. Its initial tracks, from the Michigan Southern at the state line running west-southwest to Elkhart, IN then west through Osceola and Mishawaka to South Bend, IN, opened on October 4, 1851. The full line west to Chicago opened on February 20, 1852, (running to the predecessor of today's LaSalle Street Station, together with the Chicago and Rock Island Railroad north of Englewood, IL).

The Michigan Southern and Northern Indiana Railroad consolidated with the Lake Shore Railway in 1869 becoming the Lake Shore and Michigan Southern Railroad. Later that year, the Railroad joined the Buffalo and Erie Railroad. Rails now reached into New York. From Lake Erie into Michigan, over to Illinois and back east to New York, railroad mania had gripped the nation.