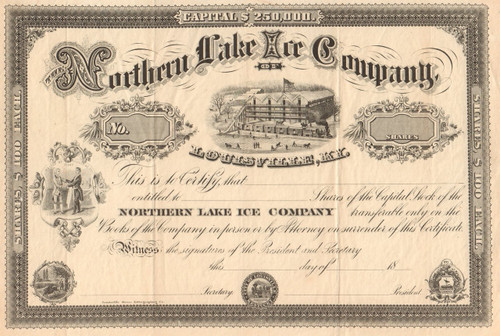 Neat collectible stock with a vignette of the company's ice block house, KY state seal to the left. Unissued and not cancelled. Circa 1879 from company records. Dated `18__.

Founded in 1879 by George Braun, the company had operations in New York and Michigan and transported ice blocks to its warehouse in Louisville KY for sales and storage in that metropolitan area. It transported its ice on the Louisville, New Albany, and Chicago Railway. The company was merged in 1905 into the Merchants Refrigerating Company

George Braun was born in Berlin, Germany, on September 9, 1835.  He came to the United States at an early age and lived in St. Louis before coming to Denison at the age of 44, in 1879.  In St. Louis, George had been employed with the Anheuser Busch Brewing Company.  In Denison, he was appointed agent for that company, which at the time controlled virtually all sales of beer in the city.  Here he established the Depot Saloon near the MK&T Depot.  In addition to the saloon enterprise, he also established the Northern Lake Ice Company, which led to the sale of fish, oysters, celery, and other rare foodstuffs that were almost unobtainable in the South.